Abigail is a high-ranked female officer of the Rebel Army. At some point in the war between the Regular and Rebel armies, she developed a crush on Trevor Spacey - her face turns red when thinking about him. Despite being on opposing sides, she continues her duties to the Rebel Army. She has a younger sister, Beatriz, who also serves in the Rebel Army as an officer. The two are very close to each other and she affectionately calls her "Betty". She also helped Grazia form the Blaze Brigade by supplying her with funds and equipment.

Originally a cadet, she was tutored by Ariadna who she had feelings for, though she was unable to admit them since she ended up as one of the Professor's experiments. Despite not being the best in a specific category, she became well known for her decision-making and completion of her tasks, one which Rebel High Command eventually decided that she would serve by General Morden's side. Unlike most of the other officers in the Rebel Army, Abigail maintains a professional attitude when speaking to Morden, and is rather disturbed when others speak casually to him.

She specializes in long-ranged combat, using customized laser drones to attack her enemies from afar.

Along with her position as one of Morden's most loyal officers, Abigail is also in command of ACE, an elite fighting squad. Dion, Romy and Kriemhild are also members of this squad.

First appearing in the Extra Ops "Sand Locker", she is assigned to locate Allen Jr. after he was reported missing after a failed operation. While roaming the desert she found a Sand Marine, and believing he may have been held prisoner, blasted a hole through it. Instead, a POW ran out on a motorbike to find Trevor and the Sand Marine focused its attention on her. As Abigail destroyed the Sand Marine, she saw Trevor pass by on the same motorbike and wanted to go with him, but continued searching for Allen Jr. instead to no avail.

She later makes another appearance in the Extra Ops "Queens Battle", where she is fighting a Jupiter Queen but struggles to defeat it. Her sister, Beatriz, is informed of this and arrives. With her sister's help, they take down the Jupiter Queen. After their victory, Trevor speeds through on a POW motorbike, causing Abigail to blush.

Sometime after these events, an Iron Nokana was built specifically for Abigail, which she called the Spacey Nokana.

During the Extra Ops "Double Face", Abigail is at the engineering department to check up on the statuses of the new Emain Macha twins, the Drache and Tiger Macha. Suddenly, an unknown intruder breaks in and starts causing havoc. She trusts one of the engineers and allows him to deploy the Drache Macha. She is surprised when the intruder resembles her. After a short battle, she is wounded and the Drache Macha is badly damaged. While in bed, she asks a soldier to bring Beatriz to her, where she has her test the Tiger Macha on her behalf.

While in a battle with the Regular Army, she tasks Rapid with disrupting their supply lines. Following the successful operation, Rapid submits a bill to Abigail to cover the costs.

Abigail would later accompany Beatriz in heading to a base holding the Frozen Cab, reminiscing about her former mentor Ariadna. An intruder suddenly attacks the base, who is none other than Ariadna herself. Abigail wonders why her former mentor is turning traitor and where she went, but Ariadna tells her to forget her past as their next battle will not be as merciful. Abigail takes her former mentor's words to heart, vowing to defeat her next time.

After recovering from her injuries, Abigail infiltrated the Martian base and caught the Professor by surprise as he thought she was either dead or gravely injured. Abigail returns the favor and kills him. The plot is further extended in the story "Subjugation Tactics", where it shows how she planned the attack.

When Geweih Metzelei invades Earth, Abigail briefs Beatriz, Vicky and Dolores and decides to temporarily ally with the Regular Army since they share a common threat, and also to see what the Regular Army has been developing lately. Geweih proves to be too strong, so Abigail decides to have their strike force retreat; however, Dion informs her he is unable to contact her, so Abigail sets out to find her. Abigail finds Beatriz and they share a tender moment before returning to base to treat her.

After the invasion, Abigail is notified that Nantes is requesting to join Allen Platoon. Though she believes she would be better off elsewhere, due to Nantes' constant requests and optimism, Abigail allows Nantes to transfer, though she tells Allen Platoon to take care of her well. Nantes is already optimistic about working with Allen Platoon and even rushes off without her tank with Destrade and the platoon's other members, so Abigail has it sent to her.

Needing to maintain an accurate information network on her enemies, Abigail sent Harriot to spy on the Martians and also to bring back the defectors. However, Harriot ends up getting caught by them and is persuaded to switch sides by Percier. She's later seen talking about how Harriot has easily defected. Abigail personally expresses her disappointment when they meet on the battlefield, and allows Navy to fight her with the Scrap Tower, though she has little faith Navy would win. Eventually she gets bored and ends their childish fight, before realizing that Harriot's laid-back personality would make her a perfect spy; knowing that she didn't mean to desert, she reinstates her as a double agent.

As the war continued to escalate, Abigail promoted Rapid, much to the latter's displeasure.

She later catches rumors of a spy in a highly secure base, complimenting Naomi's work when she spots a female researcher. Abigail stops her and demands to know their identity. The researcher blatantly gives out her actual name and that she works for the first Research Development team. Abigail quickly realizes that the researcher is the spy, seeing that she knows everyone and that she didn't give Navy permission to recruit. Abigail then orders Naomi and Chloe to apprehend the spy, who makes a run for it.

When the Christmas season approached, Abigail scolded several soldiers for relaxing despite not contributing enough and punished them all into an impromptu training session. After dealing with the soldiers, the operation began the following day. She saw that Dion was tired and ordered him to take a rest, but he declined her offer and completed his mission under a technicality, which she allowed. She was rewarded a reindeer plush for the operation, which reminded her of a gift she gave Beatriz a few years ago. When she asked Dion if she should take a temporary leave, Dion told her that she was such a major contributor that no one would dare deny her time off.

Upon learning that Morden was transformed into a girl by the Professor, she vows revenge. Fortunately, the transformation is temporary, much to her relief.

With Valentine's Day coming up, Abigail takes the time to send chocolates to Trevor. She makes her own chocolate and molds it into a sculpture of herself, which she then has attached onto a Hi-Do missile. Utilising new technology, she is able to have it sent straight to Trevor. After repelling some Invaders that attempted to occupy the base, Abigail launches the missile and wonders if Trevor appreciated her gift.

During the winter, Abigail has a Iwa Oh transport children to safety after rescuing them from heavy snowfall. Not wanting to run into the Regular Army on the way, she had positioned numerous men to scout their positions. At the same time, the Regular Army was hosting a training/holiday event; Rumi Aikawa, accompanied by Ralf and Leona, mistake the snowmen soldiers as part of the training before running into Abigail and her soldiers. After a brief scuffle, children come out from the Iwa Oh and Abigail explains she was just protecting them from the weather. She is still insistent on a fight, but the children misinterpret it as a snowball fight before both sides peacefully leave.

The following Valentine's Day, Abigail sent groups of elite soldiers to Trevor's location, having made more chocolates for him and wonders if he enjoyed them. She appeared to be unaware that he was heavily traumatized from last year's chocolate.

Abigail makes a minor appearance in "The Pharaoh Treasure", where she informs Morden about Beatriz's success in retrieving the Arabian Tear. Morden entrusts her with negotiating with their contacts.

The contacts are later revealed to be the Amadeus Syndicate, and Morden sends her off to complete the deal. She is accompanied by Allen O'Neil, where she expresses surprise at his appearance. They are attacked by rogue Amadeus Syndicate robots, immediately prompting her to conclude that the syndicate is trying to kill them, though Allen expresses his doubts. When they arrive at the syndicate's headquarters, they find the true culprit; White Baby, and drive her off. Amadeus explains her to them, and since White Baby is a threat to the Rebel Army, Abigail vows to destroy her.

In the first summer, Abigail surprises Trevor and offers to help him with his Martian problem, which he reluctantly accepts, though he has her sign a non-aggression paper to prove she is not helping him to benefit the Rebel Army. They help reclaim the Martians from the Aikawa sisters, before searching for the Yoshino and Dragunov, who have the remaining Martians. As they approach a brook, Beatriz tries to prove that she can swim, only to get caught in its current. Trevor saves her from drowning, and as they make their way across, Trevor accidentally lands on top of her before embarrassingly getting off her, much to her dislike. They then defeat the two Ptolemaic officers before finding an enraged Rootmars and slapping sense back into it. As Trevor tires out, Abigail gives him a hickey on his neck before heading back to the beach, where she finds Beatriz.

During one of her missions to recruit powerful soldiers, she came upon a village and easily overpowered their chieftain. She noted Huracan's strength and told the villagers if she came with them, the Rebel Army would leave them alone. Huracan joined, though it is unknown if Abigail kept her word in sparing the village. She would later authorize Allen Platoon to recapture the Huge Hermit when Navy requested it.

While inspecting an Iron Cab which was being maintained under Rapid's supervision, she learned that three Martians were causing havoc around Rebel territory, so she went with Beatriz to confront them. However, her clone counterpart intercepted them, so Abigail had Beatriz go on ahead to stop the Martians. Clone Abby would severely injure her in the ensuing battle.

In the second summer, Abigail makes a small appearance where she finds Trevor lying on the beach, having fallen out of the Rugname X. She states that he is "hopeless" before giving him another hickey on his neck. 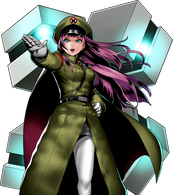 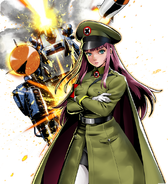 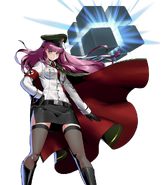 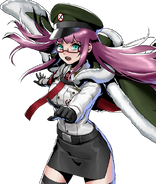 Casual Version of Abigail as her Christmas Variant 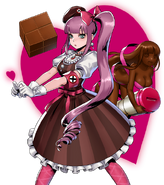 Valentine Variant of Abigail. Call as Abigail Ver. For Love 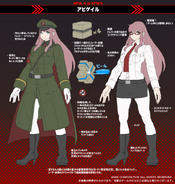 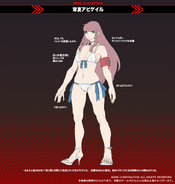 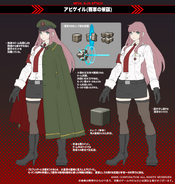 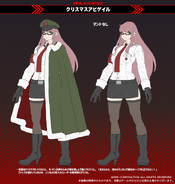 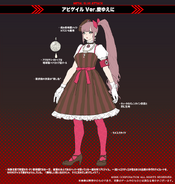 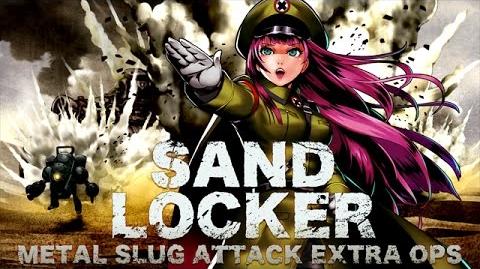 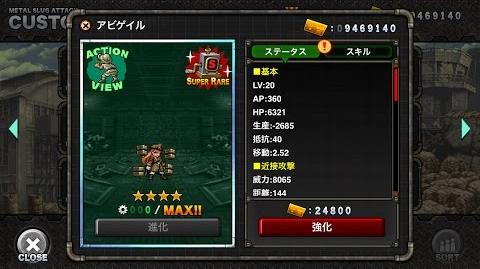 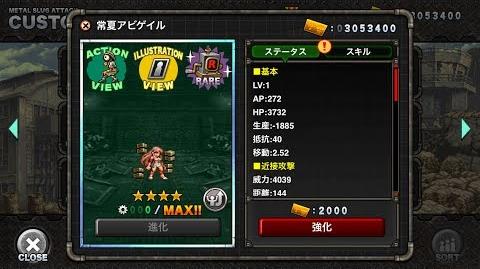 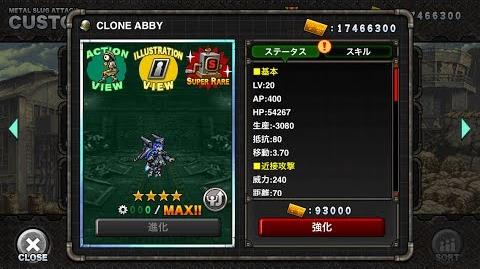