Abul Abbas is a minor antagonist who appears in Metal Slug 2 and Metal Slug X. He is the leader of the Arabian revolutionaries, having made an alliance with Donald Morden.

He appears commanding the Arabians soldiers to fight, but when he see his soldiers defeated, he retreats. He appears 2 times commanding soldiers, and 1 more time while the player is fighting against The Keesi. In Metal Slug X, the Iron Nokana replaces The Keesi.

He only orders the troops inside the vehicles and when the Keesi/Iron Nokana is destroyed, he takes out a white flag and surrenders.

Abul apparently has a good sense of smell, being able to discern the presence of women even if they're in hiding. He can show courage and bravery when needed, though he often retreats when cornered. He is considered a laughingstock by most of the Rebel Army, where he's often called "Loser Abbas", and other higher-ranked officers like Abigail are constantly disappointed with his performances.

Abul first appears in the Extra Ops "Golden Soldier", where he deploys an Assy Nero. However, he is stopped by El Dorado.

He later makes an appearance in the Extra Ops "Silent Assassin", where he is suddenly informed of a new weapon already built right beside his territory. Because of his failures, he is known throughout the Rebel Army as "Loser Abbas". Running out of ways to manipulate the situation in his favor, he decides to use his connections to the East, hiring the assassin Shizuka to regain favour with the Rebel Army.

In "Dancing Brave", he was going to have Shizuka destroy the Ptolemaic Union 03, though Aisha interrupts and asks him to assign the task to her. After some praise that causes an awkward moment, he allows her to go. When she returns, Abul thanks her, which she interprets as praise and causes another awkward moment.

While exploring some ruins with his forces, Abul encounters the Monster of the Desert, which quickly overwhelms his ill-prepared forces. Abul contemplates sending reinforcements, but is initially concerned that being defeated by a fish would be embarrassing if he reported it to Beatriz. Normally he would have Shizuka accompany him and deal with such a threat, but she was not available during the mission. However, with his forces quickly dwindling, he decides to take the embarrassment and calls Beatriz, only to be answered by Vicky. Abul offends her in his haste to get reinforcements, and orders a retreat with no other choice. However, Kriemhild arrived and saved his forces from the beast. Abul believed Vicky had played a cruel joke on him, but Kriemhild tells him that she had tapped into their calls and suggests that he improve the morale of his men. Abul boasts that he could drive her off if he wanted to for such a suggestion, even though the ACE member and Abul's soldiers know he would easily lose.

He later has an Assy Nero improved as he excavates underground. While overseeing the operation, he catches the scent of an unknown woman. Upon seeing the woman, he tries to have fun with her, much to the woman and Shizuka's disgust. Shizuka orders him to stay behind her as she senses the woman is unusually strong, before realizing that she's actually an alien. Abul barely dodges a powerful attack and becomes dismayed when the ninja strikes a conversation with the alien. The alien complains to Shizuka that Abul is looking at her in a funny manner, so Shizuka retreats with Abul under the pretense of punishing him.

Sometime later, he wonders what to send for his report to the Rebel Army. Aisha tries to lift his mood up and goes off to find some treasures to bring to his superiors. He eventually catches up to her with two of Cleopatra's priestesses, which he thanks her for. As Aisha and Wepset fight, Abul comments on how remarkable Wepset's dancing is. Wepset then gifts him a ring on his finger, but Abul collapses as it was laden with poison. Aisha then takes him away to get treatment.

He first appears guarding the Big Shiee. He spots Yoshino and battles her, only to be defeated. Yoshino reluctantly spares him and rushes off to help Dragunov and Caroline with the Big Shiee, which angers him.

He later attempts to build a new base in the Sand Kingdom with Assy Nero (being similar to that of the Extra Ops "Golden Soldier") but is foiled by El Dorado and the Regular Army, and El Dorado takes him into custody to answer for his crimes.

Abul somehow escapes El Dorado's custody, resuming his war with the Regular Army in his own nation. As he regained the Rebel Army's trust, he was given the Tani Oh to defend his territory. He later returns to base and saves Shizuka from the Ptolemaic Army, though he had to abandon the Tani Oh.

While performing more tasks for the Rebel Army, he is seen discussing his plan with Shizuka, prompting Aisha to get jealous. Abul reluctantly refuses to allow Aisha to participate in an upcoming mission, which causes her to become heartbroken. Abul had also hired Aisha sometime ago, when she wanted to serve him, and was prepared to kill herself if he refused her services. Abul accepted her services when Shizuka verified that she was not an assassin. When Aisha regains consciousness after having learned a valuable life lesson from Cleopatra, Abul apologizes for not explaining himself better, and is subsequently surprised with her sudden growth and improving her relationship with Shizuka.

Sometime in the past, Abul and his men encountered a ninja village, though they did not attack as part of negotiations. When ninja hardliners from the village attacked without warning, Abul rallied his men to raze the village. They killed an unspecified number of villagers, and Abul oversaw the operations from the Drache Macha. When Yoshino returned after learning her village was attacked, she easily overwhelmed him with her rage, but was luckily spared. 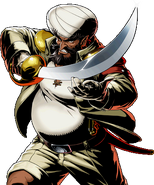 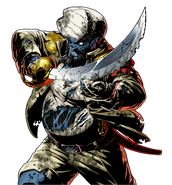 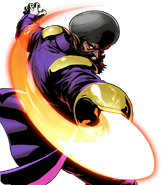 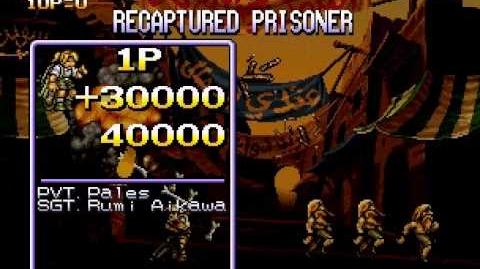