Achetto is a Ptolemaic Army cultist and one of Mira's subordinates; she was experimented on by her and given immense strength as a result. Even Yoshino admits that she outclasses her in pure strength. She wields a massive battleaxe imbued with magical energy, and as a result of using it for so long her hands are also corrupted by it.

Originally she had a purple uniform, but Mira later decided to hand her a lime-green version of her uniform.

She's fanatically loyal to Mira. She and Damian are rivals, as the two constantly attempt to beat the other in their attempts to impress Mira. Compared to Damian, who is more calm and collected, Achetto is much more reckless, usually not thinking of anything else outside of winning for Mira in battle. Outside of battle, she often gets irritated with Damian's behaviour.

She first appears in "Try Line 5th" where she and Damian are supported by Anastasia IV and her followers as they attempt to capture the Cyclobster for Mira. It is unknown whether the mission was a success or not.

Achetto later participates in a United Front with Damian. During the operation, she finds Damian acting strangely and disobeying orders. When he comes up to see what she is doing, she tells him that she plans to report him for disobedience, though she is unaware that he wanted to impress someone.

Following the operation, Mira sends Achetto and Damian into the abyss to oversee another experiment where a cultist is imbued with abyssal magic. However, another entity arrives and the three battle him. The entity easily defeats Achetto and the cultist, though she refuses to give up. Damian stops her and sends her off to get Mira, which she does but also tells him not to die on her.

She later accompanies Mira with Damian as Mira uses a spell to turn people into ashes all over the world, promising to remain by her master's side.

After Mira uses a spell to channel her powers into Ptolemaios, the latter soon goes off to test the scope of his newfound power. Achetto wonders where he has gone, and helps find him with Mira. She spots Ptolemaios channeling a powerful attack to finish off the enemy, barging in to stop him, telling him that he will kill Mira if he continues to use his powers. After Ptolemaios relents, Achetto then orders their accompanying Ptolemaic soldiers to seize the Super Cannon Transport.

She later accompanies Damian for another mission when he is somehow dragged into the border between life and death. Damian survives the encounter and gains more power in the process. As he boasts his newfound power to Achetto, she becomes weary and threatens to cleave him in half, with Sorceress, a mysterious woman Damian found there, voicing her support for her decision.

Achetto later accompanies Damian in an operation against a native village, but the natives, alongside Elysion, repel the assault. She is unimpressed with Damian's parting threat at the group.

She makes her first appearance in "A Tale of α" where she's with Mira and Damian as they try to stop the Red Goblin. She battles Jin; while the two are evenly matched, Achetto manages to push her enemy into the caves where she reunites with Damian and Mira. The two subordinates argue over who had the better battle, with Achetto trying to one-up him by stating that he was fighting a bunch of undisciplined pirates. Mira then orders the two to capture Elena and Licht, but they escape before they can do so.

Achetto makes an appearance in "Diaphtora Genesis" where she accompanies Mira with Damian and Sally to revive Ptolemaios, going on guard duty with Sally while Mira and Damian collect the required Anima. She is angered when Damian returns with a battered Mira, believing he failed to protect her, but Mira tells her to proceed with the ritual. She admits to her that she never thought she would play a role in ending her life, but instead witnesses both Ptolemaios and Mira reborn after the ritual concludes. 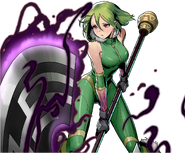 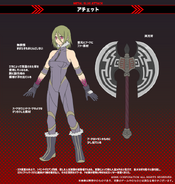