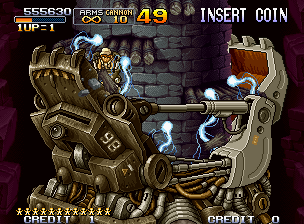 The Aeshi Nero is a gigantic excavating machine resembling a cobra created by the Rebel Army. Although it is primarily designed for burrowing purpose, it can be re-purposed for combat in a pinch.

While Metal Slug 2/X implies that it is a Martian machine (as Martian-affiliate music plays during the fight instead of the standard boss music, and only supernatural enemies appear throughout the level; it is likely a reference to "alien hunters" who believe the Pyramids were built by aliens). Its description in Metal Slug Attack confirms that it was constructed by the Rebels to clear out room for a base.

The Aeshi Nero is fought in a tower inside a tomb, with it digging through and suddenly appearing from the bottom. Whenever the player climbs, it will also follow them, while launching missiles and electric balls. It will also intermittently charge and fire its laser cannon that will go up the entire tower. The laser is extremely fast, forcing the player to go to the edge of a wooden platform to avoid it. The missiles and electric balls are easy to dodge, but the fact that the player is in a limited space and can fall to their doom if one is not careful tends to make this boss a bit hard. Also, it may suddenly crawl up and electrocute the player with energy sparks, so keep on jumping up.

Having Slugnoid will make the battle much easier. However, losing the slug can make this fight quite annoying, as the player will need to constantly jump and shoot down. Sometimes a Rocket Launcher or a Heavy Machine Gun box will drop down. However, they may fall in the inside the boss's mouth, making the retrieval process difficult.