No information
Agalia is a new character introduced in Metal Slug Attack.

Agalia is a vampire queen who rules over her kind. She saves her kind from humans and is unfamiliar with human society, but nonetheless appears to respect them by issuing a decree that forbids vampires from leaving her lands to feast on humans. She sends enforcers to punish those who disregard her rules, with Sharl being her best enforcer.

She is also prideful and dislikes underhanded tactics. She was also responsible for releasing Aswang from Vatn's seal.

As a vampire, Agalia enjoys feasting on blood. Unlike Aswang, Agalia is capable of feeding without coming into physical contact. She normally appears as a typical vampire, but if she has acquired enough blood, she can "transform" into a more human-like form which resembles a young girl. If she expends too much power, she is forced to resort to this form.

First appearing in "United Front the 2nd", Agalia battles a large group of enemy soldiers since she is hungry. After killing them, she departs from the battlefield.

Sometime later, she would eventually manage to bring Vatn under her control by drinking his blood. However, this cost her a considerable amount of energy in both transforming and controlling him, so she was forced to assume her human form. Despite her control over him, it was not complete and Vatn occasionally showed signs of disobedience.

During one of their missions, she learned of a Sky Jupiter Queen holding a considerable amount of energy. Since she was still weakened, she had Vatn destroy the machine to collect its energy, though he refused to chase after Caroline and Dragunov, who successfully escaped.

Still with her forced servant, Agalia visits a battlefield where she catches the scent of a werewolf that had partaken in the battle. Knowing such a beast cannot be allowed to roam in human society, she decides to hunt it down, much to Vatn's disdain. Despite her efforts, the werewolf throws her off her trail.

She later sends Sharl to investigate reports of vampires disregarding her orders, two at both unnamed towns. 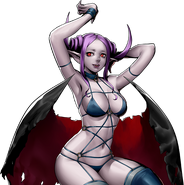 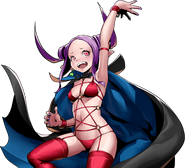 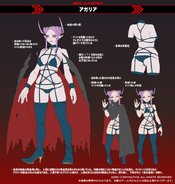 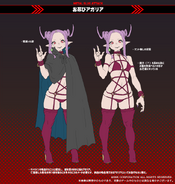