Ai Agate is a rookie Invader assigned to the Research Unit division for the Invaders' invasion of Earth. On Nowan's suggestion, she decided to try mimicry and currently takes on the form of a young human girl with heterochromatic eyes and a gothic-themed dress. She is usually accompanied by her partner "Citrine", a white Winged Invader, using it to attack her enemies. However, as Citrine is incapable of mimicry, this usually results in Agate being compromised immediately.

She adores cute creatures, although she has a "ranking" system in place based on their appearances. She adores Citrine, considering it to be the number one creature in her book. She is capable of understanding it and does not tolerate anyone who knowingly insists Citrine is nasty.

First appearing in "Ugly Friend", Agate heads to Earth to investigate various creatures of the land, mountains and sea. She comes across an elephant being chased by the Regular Army and blows Avvio away, believing that he is bullying the poor creature. She then begins to inquire with Roberto Nicola with Citrine, but the conversation is interrupted by a voracious Schwarz Metzelei, who tries to attack both Citrine and the elephant, who she protects. Agate allows Schwarz to eat the humans, but becomes irritated when the Metzelei insults Citrine and tries to attack both it and the elephant. She ends up having to threaten Schwarz and upon learning that Roberto did not want to bully the elephant, leaves with Citrine to continue her research.

Agate later begins investigating a forest when she runs into Maki and her bear companion. Maki remarks on how cute Citrine is, which Agate appreciates and also notes how Maki shares a similar relationship to her bear companion. Jin tries attacking her to no avail due to her suspicions as she trails a mutated, parasitic Queen Big Snail. The mutated snail poisons Jin, forcing Maki to transform into her kitsune form to heal her. Agate manages to spot Maki's true form and continues chasing the snail to no avail as it eventually escapes. She then remarks with Maki on how the snail was probably cute before its mutations. 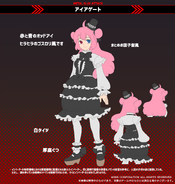