Alisa Stewart is a playable character in Metal Slug Warriors and its remake, Universal Metal Slug: Triumph. She uses a unique mechanic where she can open up her parachute by jumping twice in midair and a Wrench for melee attack.

She appears as a cameo character in Metal Slug Defense as part of the POW list. Her design was changed to be similar to Fio.

She appears in Metal Slug Attack a Rare purchase, then part of the POW Shop. Alisa reuses her sprites from Metal Slug Warriors.

For close combat, she conserves her wrench, for long distance, she uses a Heavy Machine Gun Salvo and for her special attack, she uses a Big Rocket Launcher with the same effect of Everlasting Summer Fio (the rocket releasing four water mines). If Skill 4 is unlocked, she can launch two rockets in place of one. 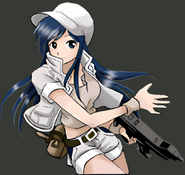 This article is a stub. You can help Metal Slug Wiki by expanding it.
Community content is available under CC-BY-SA unless otherwise noted.
Advertisement