No information
Alma is a new character introduced in Metal Slug Attack, debuting in the "Beast Power" Extra Ops.

A researcher for the Amadeus Syndicate, Alma focuses on genetics and began her own research on modifying animal cells to share their traits. Not having a test subject, she decided to use herself for her own experiments. After much hard work, she successfully created a virus to transform her into an animal. She only takes a small dose each time she needs to, as too much makes her completely feral. She also developed an anti-virus to revert her back into a human, which she can take by herself or with others if she becomes too uncontrollable.

She is on good terms with Aileen, a former Amadeus Syndicate soldier-turned pirate.

Sometime while on duty, she saved Otto after he was being hunted by vampires. The two are on good terms, and in gratitude, Otto helps her out with her experiments whenever she needs him.

Alma managed to find the secret of modifying animal cells and used it on herself to perform several tests. Clone Betty, who had been dispatched by the Professor to obtain information, runs into her and the two fight. Alma is impressed with the potency of her newly created virus and easily defeats Clone Betty, who retreats. As she files a report she gets hungry and another researcher assumes that she is experimenting on herself again, which she denies.

She later watches Amadeus oversees a Brave Guerrier being painted gold and asks her why he is doing that, believing that the money would be better spent on research. Amadeus scolds her and states that visible investments bring results, though this ends up being a disaster as the Brave Guerrier Type-G soon gets targeted and destroyed by the other armies. Alma is later seen scavenging some of the parts to resell.

Due to budget cuts incurred by Amadeus for her incompetence following the recent Halloween party, Alma becomes desperate to get back on his good graces. Believing that she needs to prove her value in combat and not with results, she decides to tackle a Deep Blowfish. While sneaking into the Ptolemaic base, she deploys a "Catifier", a powdery medicine which causes those affected to become cat-like to distract the guards, but forgets to account for the increased sense of smell. Otto arrives, although somewhat late, and helps her take down the Deep Blowfish. Following their victory, she offers to buy him some drinks at the local bar, but he declines her offer as he must go on the run again.

Amadeus later hands her a script for her to tell the other Amadeus personnel in an announcement. Having called Otto again, he reminds her not to mess up the speech. Alma starts reading from the script, only for the Iron Fortress to barge in stating she hates her sister and launches a missile at the two. Alma barely manages to calm her down, but First Baby arrives and this prompts the Iron Fortress to launch more missiles at her and Otto, though both survive. Following the tantrum, which all the personnel were listening in on, Alma orders everyone to get the Iron Fortress back as she's the old man's favorite. The Syndicate is able to recover Iron Fortress, but Amadeus was offended by her calling him an "old man" and has her move into a room with no running water and electricity as punishment. She then manages to get Otto's help in moving her materials to her new room.

Following the operation, Alma hears of a Halloween party hosted by Beatriz and Dolores and attends. During the party, she sees two very familiar zombies, believing that the virus was working better than expected. The two men are forced to flee, as she would have compromised their identity, though she does not appear to realize who they were.

She makes a small appearance in "The Dream of the Pirate" story where she finds Aileen attempting to desert. Aileen tells her of the dream she desires and Alma asks her if it is not possible to achieve the dream with the Amadeus Syndicate, which Aileen confirms. Alma allows Aileen to leave and bids farewell to her, and does not report it to the higher ups.

During a Halloween party, Alma is one of the four "Queens of Halloween", along with Beatriz, Nikita and Simon. The party turns into a mess when Beatriz arrives without the antidote, due to amnesia brought on by a Snow Monoeye. She attempts to stall the remaining coherent zombies with challenges, even activating the Jade John and Amadeus' Gamma computer, both of which are severely damaged. Upon being cornered, she admits that the Syndicate could make the serum, but would take years to do so. When Navy arrives with the antidotes and P.F squad cures themselves, Alma is happy with the ending. However, Amadeus soon arrives and yells at her for damaging his machines, promising that her actions will not go unchecked. After the debacle, Alma gives P.F squad all of their zombie serum and antidote as compensation.

Otto later goes missing, although Alma manages to find him and injects him with a serum to help him recover. She also finds Iron Fortress and informs her that the Regular Army has pinned White Baby down, though she assumes she has a plan as she always relies on unorthodox tactics to get through any situation. 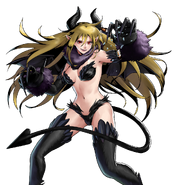 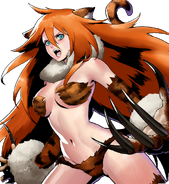 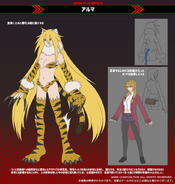 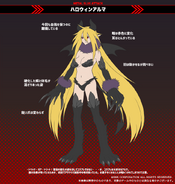