Unknown
Anastasia I is a new character introduced in Metal Slug Attack.

In battle, she uses two spear halves embedded with a hidden gem that grants her unnatural power. The halves can be combined to create a single spear that deals massive damage to her enemies. She is quite confident in her own abilities and is bossy by nature. Despite this, her exceptional charisma can easily persuade her those under her command to fight and die for her.

First appearing in "United Front the 25th", she encounters an alien that shows her a vision of the future which would lead to ruin. Unwilling to stand by and do nothing, she decides to form a sect to maintain a peaceful future.

Alongside her great-granddaughter, she gives Zahara her blessings when she is promoted into the commander of the Guardian Unit. She quickly notices that both Anastasia IV and Zahara are troubled. She helps train Zahara by sending her to battle against the Rebel Army; after the training, her great-granddaughter scolds her, only for Zahara to stand up and begin arguing with her. Anastasia I is pleased at Zahara's new resolve and the subsequent arguing, leaving to train the other believers. 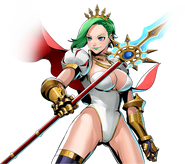 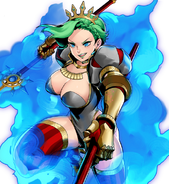 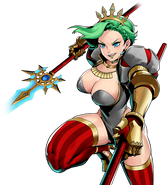 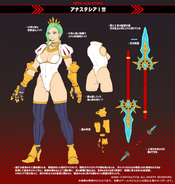