The fourth priestess of an unknown sect, Anastasia IV and her predecessors were guarding a hidden treasure that Ptolemaios was interested in. After many gruelling battles, she successfully negotiated with Ptolemaios and the two became allies. Zahara is one of her childhood friends, although her great-grandmother notes that they have an "oil and water" relationship.

She uses the many artefacts that her predecessors used to defend the hidden treasure. Very few outsiders are aware of the sect. Due to her position, she trusts very few people. Beecham and Melvina are her bodyguards, and she has numerous sect members that faithfully serve her.

She is mentioned in "United Front the 9th", where she sends Beecham to find out what Mira is hiding.

Anastasia does not make an official appearance until "Try Line 5th", where she and her sect accompany Damian and Achetto in capturing the Cyclobster. When some believers express their disdain for the attitude towards their leader and why she tolerates it, Anastasia shows them why she allows it by watching the two in battle.

Sometime later, Anastasia's great-grandmother soon arrives to the present timeline utilising time tears caused by Ptolemaios. She is humbled to see her and accepts her aid. After the operation, Anastasia I decides to help her out until she was satisfied with the direction the sect was going.

Soon after, the commander of the Guardian Unit died in an operation, prompting both Anastasia and her great-grandmother to crown Zahara, an old childhood friend of hers as the new commander, bestowing her with two wands for battle. Anastasia frets over sending her friends to die in her name. Her great-grandmother, sensing her troubles, takes Zahara to train against the Rebel Army. Anastasia soon learns of the training and scolds her great-grandmother for endangering Zahara, before Zahara snaps back at her for worrying too much.

Her mother, Anastasia III, died of unknown causes, prompting Anastasia IV to become the new leader of her sect. However, she was still young, so the Master Believer assisted her until she was old enough. She soon calls the Ptolemaic Army for assistance, and as part of the deal, gives them an artefact for protection. Anastasia is also granted a vision by the Dark Monoeye, revealing that Ptolemaios was not to be trusted. Anastasia decides to feign their alliance, hoping to find allies that could oppose him. 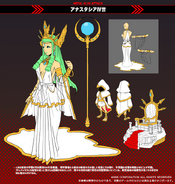 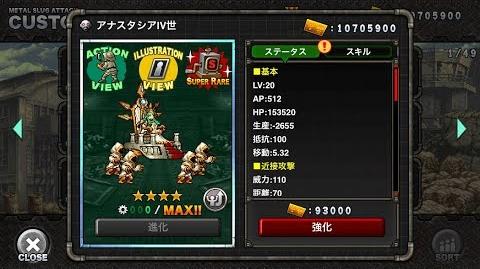