No information
Ariadna is a new unit introduced in Metal Slug Attack. She debuts in the "Revival of Intention" Extra Ops.

Ariadana, like the Professor and Percier, once worked for the Rebel Army, serving as both a commander and Abigail's tutor. The Professor removed most of her memories from experiments when she was unconscious from battle injuries. While she stayed with the Rebel Army after recovering, she soon lost interest in the human conflicts and disappeared, catching up with the Professor, who had joined the Martians.

While she seems to lack armor, the Professor's experimentation has allowed her to materialize armor and obtain superspeed at will whenever she wants to. It's also allowed her to carry an extremely heavy grenade launcher.

A prominent commander, she shows a softer side to her due to losing most of her memories. She also used to be Abigail's former crush, though it's unknown if she returned her feelings.

Ariadna leaves the company of the Martians temporarily to attack a Rebel Army base. Her attack catches the attention of Abigail and Beatriz, the former of which is surprised to see her again. After a short battle, she tells Abigail that she is her enemy now and that her feelings shouldn't take over her decisions. This prompts Abigail to train harder so that she can defeat her one-day, something which she is looking forward to.

Returning to base, Percier asks her where she went. The Professor appears and tells her that human bonds are nothing now, to which she silently agrees to.

Briefly appearing in "Everlasting Summer Returns", Ariadna looks at the Professor's plans and tells him that he is using a neutral island which would make him the enemy of all the factions should he use that island. She eventually gets bored and returns to Mars. As the Martians collect data on Trevor, Ariadna passes by, barely interested and tells a Mars People Cadre she is returning to Mars and their "guest" is waking up again.

Later on in "Subjugation Tactics", she informs the Professor that her former student is not to be underestimated and that he should guard himself. While walking around, she runs into Percier who is knitting for the Gemini Twins. Ariadna admits that she sees Percier as a completely different person. When the doors jam, she wonders if something has gone on, as while she did not sense anything wrong, she somehow knows something is not right and goes off to investigate. 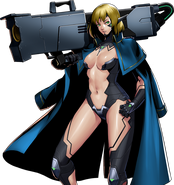 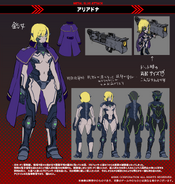