The Avatar of Evil (邪悪の権化, Jaaku no Gonge) is the final boss of Metal Slug 5. It's the final deity of fear revered by the cult of the Ptolemaic Army.

Although its origins and purpose are unknown (the game makes no mention of its existence until the final battle), it is perhaps the true mastermind of the game's events, possibly manipulating the Ptolemaic Army through the white masks used by their cult leaders. In the main game, it relies on energy projectiles and its scythe, known as a Life Reaper, to attack its enemies.

Only one thing is for certain; it is susceptible to conventional human weaponry, enough to send it packing after prolonged damage. So despite its fearsome appearance and notable strength, the Avatar of Evil is actually not all-powerful by any means.

According to Mira, the Avatar of Evil is powered by human emotions, and feeds off them to grow stronger. Its weapon, the Life Reaper is a sentient organic scythe that is said to have a mind of its own in which it thrives off the souls of the living.

At the beginning of the fight, the players' characters use their "chilly" animation, suggesting that the boss may have a cold body or that the battle takes place at a high altitude.

In battle, the Avatar of Evil attacks by casting a series of energy spheres that track down the player. After a short time, it will cast a large amount of spheres and fly away. The demon's shadow will appear in the background, raising its Life Reaper to target the player's position, giving a moments notice to get out of the way. Merely dodging the scythe is not enough, as it will create a spray of deadly arcing smoke projectiles upon impact with the ground. Its weak spot is the skull on its chest.

Once sufficiently damaged, several explosions will burst forth from the demon, and it will fly away - thus preventing us from ever knowing exactly what this behemoth was.

The Avatar of Evil made its debut as a playable unit in Metal Slug Attack as the Ptolemaic Army's Ultimate Boss, summoned and developed by Mira. Being an incredibly powerful and large being, a massive summoning portal surrounds its hip area, making it incapable of standard movement. It retains the standard energy projectile attack as in the original encounter, spewing out numerous projectiles that roughly target the nearest enemy unit in range.

It has some new attacks up its sleeve however: the skull protruding from its chest is capable of breathing deadly flames, and the scythe is an organic weapon known as the Life Reaper; the Avatar of Evil will leap from the portal to fly, positioning itself above a nearby enemy unit or as far as possible, before slamming its scythe behind them and raking backwards, spewing out deadly flames that incinerate anything it touches, before readjusting itself accordingly, making its special attack the only way to move around.

As a standalone unit, the Life Reaper possesses a will of its own and tries to capture the living. It simply jabs enemies as a standard attack, spins around as a counter evasion and retains the same special as if the Avatar of Evil was using it.

The Avatar of Evil's Slash Attack 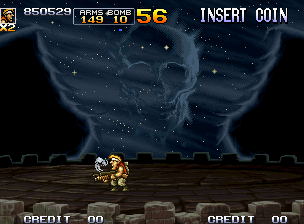