Looking at himself, Flirting with girls
Avvio is a new character introduced in Metal Slug Attack.

Avvio is a member of the Metal Device Project, although unlike the other members who either have a suit or given prosthetics, he was given a special pistol. This pistol uses special thunder bullets and can generate a small ball of electricity to zap enemies.

He's quite acrobatic and also carries a grappling wire which allows him to evade incoming attacks and fire on enemies at the same time.

Outside of his agility and gun skills, Avvio is a narcissist, attempting to hit on any female regardless of their age or affiliation, calling them "little kittens". He attempted to hit on Rita once, but this caused an incident in which he was sent flying from the base. His alternate win animation suggests that he is attracted to her the most out of any other woman. When not in battle, he spends his time carefully grooming his appearance.

He also has a cousin named Charlotte.

First appearing in "Task Force 3rd", Avvio is assigned to the same group as Fio and Roberto to an island for additional training. He easily avoids several traps, prompting Midori to comment on his agility, before he hits on her, causing the young mechanic to roll her eyes. Roberto yells at him for causing Midori to roll her eyes, in which he claims that she'll understand as she grows older, prompting him to roll his eyes too.

The pair later encounter Schwarz Metzelei and Fedeln Metzelei, where Avvio attempts to hit on Schwarz, before Roberto yells at him again for getting distracted. He defends himself by stating that Roberto was smitten with a Rebel idol before, prompting Roberto to drag him away for revealing an embarrassing secret.

Following the run, Avvio is dismayed that there isn't a unit strengthening skill for "handsome men", as Roberto scolds him for lacking teamwork skills. Eri then decides to take the "lumbering idiot" (him) for another run. He attempts to hit on her, but Eri threatens to kill him if he tries it, putting him in place. Eri then drags him away, much to his dismay because he won't have any time to look at himself.

With all the new weapons being developed by M.D.P.S, Avvio and Roberto are talking about them just as Rita sighs. He notes that she is unusually depressed, but attempts to console her by stating that her legs are better than any weapon they could develop.

Sometime later, the Regular Army develops a new Elephant Slug for the war effort. However, it unexpectedly breaks free of its confinement, so Avvio is ordered alongside Roberto to recapture the runaway beast. They manage to track the beast down, but Avvio is blown far away by Ai Agate before he could do anything, as the Invader believed him to be bullying the poor creature. It took the Regular Army four days to find him afterwards.

He first appears in "New Generations!" where he's first seen sparring with Reika. Following an attack by the Rebel Army which nearly destroys the base, Avvio is scolded by Eri for giving up and being too distracted.

The incident in with Rita is also revealed in the story's secret ending, in which he was sent flying out of the base because Roberto feared that Rita would unintentionally kill him in training, and asked him to bail him out by using his "obnoxious" lines on her. 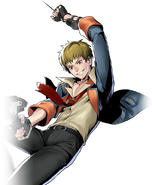 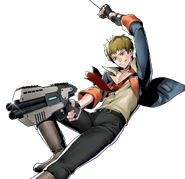 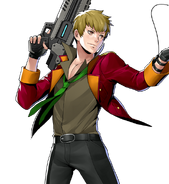 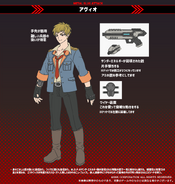