The Believers are an enemy unit introduced in Metal Slug Attack.

The Believers are devoted followers of an unnamed religion under the new High Priestess Anastasia IV. The sect is very secretive and virtually unknown to most outsiders. They are bitter allies with the Ptolemaic Army through a connection between Ptolemaios and the sect's valued treasure.

The Guardians are similar to the Believers in terms of attire, although their robes are orange, and parts of their face can be seen. 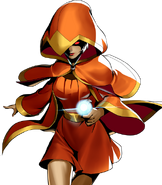