Bersek is a new character introduced in Metal Slug Attack.

Bersek used to serve in the Regular Army and was in a romantic relationship with Louise. He had planned for their engagement in the process. During an operation against an unknown enemy, Louise was wounded. Bersek hid her before going out to check their surroundings, despite her protests. He never returned, instead captured by the Invaders, who saw potential and experimented on him. Although little was changed with his appearance, a chip was implanted to force subtle loyalty to the Invaders.

Though he still thinks of Louise from time to time, he prefers not to think about the past. This is probably a result of having guilt for not being able to fulfill the promises they made to each other. He appears to be on good terms with Fedeln Metzelei, being one of the few Invaders who doesn't show annoyance or anger towards him.

Already a skilled combatant while serving in the Regular Army, the experiments performed on him have further improved his strength and agility. He was also given two futuristic tonfas which serve as both melee and ranged weapons. During battle, he gets into a frenzy and doesn't stop until the battle ends.

Bersek is briefly mentioned in "Tropical Battles" where he hides a wounded Louise from the enemy before going out to check if the area was safe, against her protests.

Bersek makes his first appearance in "Memories of Mirage", where he is sent to Earth with Fedeln to find a core from a legendary ship. Being his first time back on Earth since his abduction, Fedeln asks him if they should visit "her" at least once before they leave; Bersek refuses as it brings up bad memories. They soon encounter their target, a Mirage Shiee, which he destroys, before he senses additional contacts and drags Fedeln with him to hide. The contacts he sensed were Louise and Reika. Although he is able to evade Louise, his hasty attempt to avoid her ends up with him getting poisoned by Fedeln, though he is treated for his wounds upon returning. 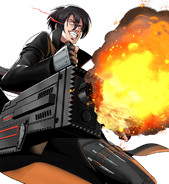 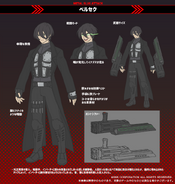