Biene is the second of the three Goldenes sisters, being older than Drache Goldenes but younger than Goldenes Krieger. She came sometime after the Metzeleis landed, taking on the form of a humanoid - the only things that make her indicate that she isn't human is her bee-like headpiece and wings.

Like her sisters, she is obsessed with gold, having destroyed numerous planets in its search for it. In battle, she calmly directs her bee-like minions to swarm and shred her enemies.

First appearing in "Try Line 18th", Bienes learns of gold on Earth and immediately makes her way there with Geweih Metzelei. Excited and impatient for gold, she soon sends her bee-like minions out to search for the fabled material and turn the surrounding area into a nest. During her attack against a Regular Army base, she discovers golden weaponry and orders her bees to extract the gold and convert it.

Sometime later, Bloom Metzelei asks Bienes to check in on Lieben for her on Earth. Bienes travels to Earth and finds Lieben being attacked by Little Lady Black, protecting Lieben by sending her bees to incapacitate the Black Hound. Lieben then tries to repair it, but Bienes stops her from doing so, reminding her that it would cause more problems for the forest as the two leave. 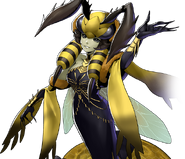 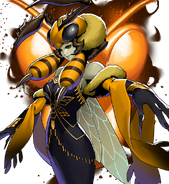 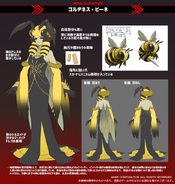