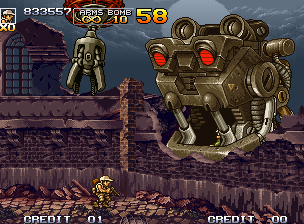 Big John is the boss of Mission 4 from Metal Slug 4.

Big John is a giant mechanical puppet created by the Amadeus Syndicate.[1] This weaponized puppet was used by Amadeus Syndicate to transform the employees and attendees of a horror-themed amusement park into Mummies or Zombies, using a virus similar to what the purple gas and Monoeye UFO used respectively. It is operated by a Rebel soldier.

It tries to turn the player into a zombie that, if successful, could end up being its undoing, as this opens up the possibility for the player to attack via the powerful "Vomit Laser".

The fight against Big John is composed of three phases:

Introduced in version 1.26, Big John can be purchased as a unit for 300 medals. It costs 600 AP to deploy. Being a stationary unit, it is deployed using a Miner. It fires missiles its primary attack, and attacks close-range units by releasing virus vials; it summons its laser cannon from above as its special, and uses it to cover a relatively short area in front of it.

Its missiles deal high damage have very long detection range and infinite range once fired. This in combination with its fairly high health and the fast running speed of its builder make it one of the most effective units in the game. However, it cannot hit even low-flying air units with its missiles, leaving it largely defenseless against air units, which generally sit safely outside the range of its special. If inadequately defended, melee units - particularly Green Hazmat Soldiers and Smashers, which can deploy units behind/hover over the missiles - can shut it down by forcing it to rely on its weak close-range attack. Big John's builder is also vulnerable to penetrating shots from units like Big Shiee, which can give the opponent large amounts of AP while wasting your own.

Big John appears for the "Zombie Parade" Extra Ops. Unit pieces can be earned through Another Story's "Halloween on a Moonless Night". New variants are also introduced. 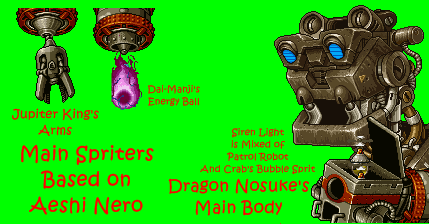