The Big Shiee is the fourth boss from Metal Slug 2/X.

Big Shiee is a large amphibious battleship designed for traveling on water and land, using its tracks to travel like a conventional tank. It is armed with several cannon battery, as well as a large main cannon which is hidden on the front. It literally serves as a land battleship.

All the side-cannons of the tank will constantly fire at the player, so the player must keep moving all the time while shooting them. Once at least four to five of the cannons are taken down, the boss will show its main cannon, a short-barreled huge-caliber weapon which fires a large heavy shell. This cannon is also used on the second boss in MS4 (Toschka Dalanue). If the player avoid the shell and are above it when it explodes, they will be flung into the air which is a perfect opportunity to damage the large cannon with the one on the Metal Slug. 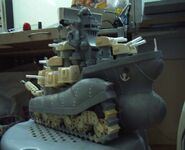 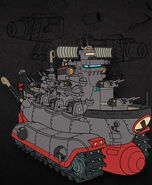 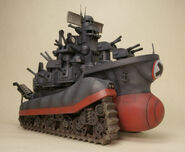