The Milky Way Far Away[1]

One of the four Metzeleis, as her name suggests, Bloom has a more plant-like appearance. She can grow all sorts of plants in combat, either sending her "children" or growing large floral stalks that release powder to immobilize enemies. According to Fedeln Metzelei, she also makes good honey.

She is born from a planet shrouded by rainforest. Her species can parasitize the wild animals and migrate by extracting their needed nutrition. At an unspecified time, a meteorite collided into the planet, drastically altering the planet's climate to freezing temperatures. Many of the inhabitants, including Bloom's species, were at the brink of extinction when Geweih Metzelei arrived. The intense heat he generated caused the planet to slowly return back to normal; in gratitude, Bloom decided to follow him, regardless of the intentions he had behind his arrival, eventually becoming one of the four Metzelei.[1]

Bloom considers herself to be the most loving Invader in all of the galaxy, and loves cute things. She constantly dotes on her "children" whenever possible by feeding them with a mix of "love" and nourishment (humans). Following a visit to Earth where she ate numerous poisonous creatures, her skin temporarily changed from the typical plant green to a more noxious-purple color. One of her children is Lieben; due to her restorative powers, many attempted to kidnap her, prompting Bloom to hide her in a forest on Earth for her own safety.

She views Fedeln with absolute contempt and hatred, because he killed one her "children" in an unspecified incident. She also dislikes Nowan for unknown reasons, though this is most likely to their unfriendly attitude. She treats Geweih with utmost respect.

First appearing in "Bloom Disaster", Bloom decides to visit Earth and is given Rillacle as her guide. Upon landing however, Rillacle goes off to "play" with the humans, asking Bloom to join in. Bloom politely declines her request, stating that she has work to do.

Bloom kills several Blaze Brigade members which attract the attention of Grazia and her subordinates. Bloom is intrigued by them, realizing why Schwarz came to Earth because of its "unique" humans. Though Bloom has the upper hand due to her immobilizing powder, Fedeln inexplicably arrives, his presence enraging her as she demands he leave. Fedeln refuses to leave, so she clips his wings off in response, but it does not stop him. After he attempts to ask for some honey, Bloom storms off and leaves Earth for the time being to get away from him.

Bloom is later contacted by Geweih Metzelei after the latter decides to use Earth as a new Invader ground. She scolds Schwarz when the latter yells at Geweih due to interrupting her feeding time, before softening up to Geweih. Geweih tasks the two with safeguarding their new land, and she complies, promising to make it their second "Eden".

She later appears in a flashback with Nowan and Schwarz Metzelei, where she states that she would go with them, but only for Geweih's sake and warns Nowan not to go near her "children".

Sometime after witnessing the arrival of the Invader King, Bloom decides to augment herself with Invader technology, furthering empowering her already potent abilities. She arrives on an island and easily overruns the local Ptolemaic base, although disappointed as there weren't enough humans for her "children". She soon encounters Yuki Tsuki Hana, who arrived to take revenge on the Ptolemaics. Bloom is able to handle all four ronin at once due to her strength and the island's affinity, but all four of them are teleported away by a mysterious woman. This in turn makes her wonder who those humans were, as she was unable to sense them afterwards.

In the following Halloween, Bloom hosts a party and requests attendees bring candy to satisfy her children. She mimicries into a human form and greets the attendees, which include Nikita, MS-Alice and Whip. Nikita had intended to bring candy as requested, but the plan goes awry when Li Lin, a jiangshi, learns of the party and plays a trick, causing the shipment to arrive late. Bloom becomes irritated at the jiangshi and orders both her and the other attendees to rectify the situation or she would have her children eat them instead. They manage to recover the candy and Bloom briefly returns to her normal form, but is spotted by Whip in the process. She takes her leave soon after.

Bloom later wonders how her "daughter" is doing and asks Biene Goldenes to check in on her. 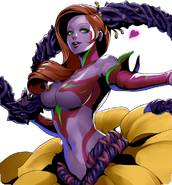 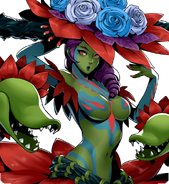 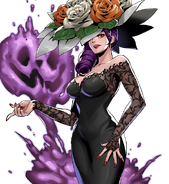 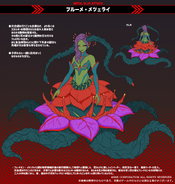 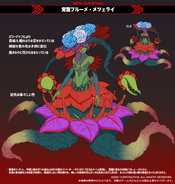 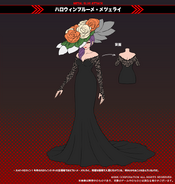