Bonny was born to an ordinary family on Earth. She was a student who's got annoyed of the quietness of daily living. She would later discover a crashed U.F.O. and made contact with the Mars People.[1] A self-proclaimed friend of the Martians, Bonny works alongside them. The Professor gave her a teleportation belt allowing her to teleport a short distance from her last location. He also gave her a customized ray gun that shoots special spores which can be combined for additional firepower.

She has a flashy behavior, but is able to communicate with the Martians like the Professor and Percier.

First appearing in "United Front the 11th", the Martian Rangers prepare for a mission on Earth after hearing of another fight. Bonny abducts Attacker, desiring to take its place in the mission. Upon arriving on Earth, Tank is surprised by her appearance, demanding to know where "Attacker" went. She claims that they went on a vacation and sets off to fight the enemy before they could question her further.

The two Martian Rangers eventually find their comrade, who is scarred with the treatment Bonny subjected it to. Tank intends to report her to the Professor, while Healer finds a shiny coin in the ground and asks Bonny what it is. Bonny recognizes it as a United Coin and attempts to explain it to them. However, Tank becomes alarmed and has Attacker vaporize it. Tank exclaims that it is what the humans fight for and deduces that it must be destroyed to protect Earth. This depresses Bonny, as she planned to go shopping with her coins.

She later returns to Earth for another mission, but she suffers from space sickness on the way and loses consciousness. Two Martians try to resuscitate her, but they're distracted by another voice and leave her for the time being.

During an operation on Earth, Bonny partakes in defending a mine from an large military conglomerate. She encounters Maya and frantically uses her teleport belt to avoid getting mashed by the miner. The Mars People Rangers and Clario (who was sleeping), are overwhelmed by Ido and are nearly killed by her when Bonny comes in and teleports the group away to safety, although the amount she took with her quickly causes her to collapse from exhaustion, and right outside the mine's entrance. 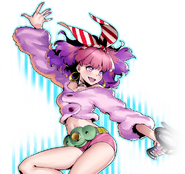 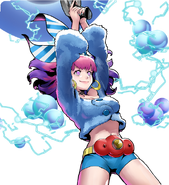 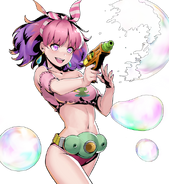 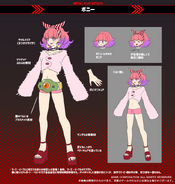 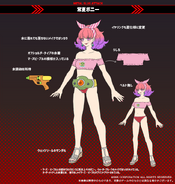