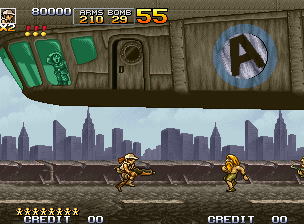 The Brave Guerrier (alternatively spelt Buria Gariae) is the boss of Mission 1 in Metal Slug 4.

The Brave Guerrier is a support blimp created by the Rebel Army and Amadeus Syndicate. It is used for carrying troops to the field and to give support fire from any range.

In Mission 5, the Brave Guerrier can be seen assisting the Sea Satan submarine despite being heavily damaged and its pilots killed from the previous battle. It attacks by launching rockets at the player. While no explanation was given in the game itself, Metal Slug Attack revealed that the blimp is under the control of an artificial intelligence.

The battle against the Brave Guerrier is divided into three phases.

In Mission 1, POWs periodically appear providing the player with either a Heavy Machine Gun or a food item when rescued.

It appears in Metal Slug Attack in the Extra Ops "Snatch Wars Season 4", renamed the "Brave Guerrier" and deployed by the Doctor as his special attack. The attack pattern of the Brave Guerrier remains the same as in the original game, though it cannot be destroyed and also deploys a small group of Amadeus Bazooka Soldiers.

Originally, the Doctor was able to deploy as many blimps as he pleases leading to massive attack damage. A subsequent update nerfs this to only deploying again once the Brave Guerrier leaves the battlefield.

Brave Guerrier's full body, showing an unused tail on the back of it.

Concept art of the Blimp shown in Metal Slug X