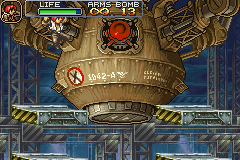 The Cabracan is a powerful weapon developed by Rebel Army capable of producing earthquakes to destroy targets.

The Cabracan's only weak spot is the red core on the front. At first, it will raise a barrier around the core and send two Cabracan Pods to attack the player. The second drone destroyed the player will drop a Heavy Machine Gun. After the pods are destroyed, the barrier will deactivate, then the boss will fire a series of energy projectiles, followed by a giant laser, making all platforms fall. The boss will move down and begin firing small lasers that bounce off the wall, once it has flames all over. It will send more Cabracan Pods and gains a new attack where it fires lasers in a circle, requiring the player to stand directly underneath the boss.

Its flying drones have the same look as a Sensor Mine.