Looking at herself
Charlotte is a new character introduced in Metal Slug Attack.

Charlotte is a member of S.P.A.R.R.O.W.S and is also Avvio's cousin. Like him, she's confident in her looks, often showing off her cute and small appearance and is also proficient with a gun.

She dresses up in a small suit that resembles a bunny and also uses an electric gun like him. It shoots out electromagnetic waves and can also deploy egg shaped-like bunnies to electrocute enemies.

First appearing in "Easter Courage", Charlotte accompanies Midori to infiltrate some ruins that require Easter-embracing people to enter. She has the player assist her in acquiring the necessary eggs; during the mission, she runs into members of the Mirage Circus. After running into the King's Egg and fighting it, Midori realizes its still collecting energy, prompting Charlotte to ask the player to continue helping them which they accept, much to her delight. 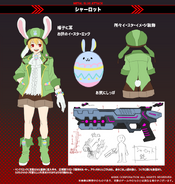