No information
Chloe is a new character introduced in Metal Slug Attack.

A Rebel Army transportation officer, Chloe pilots the "Naglfar", a variant of The Union. So far there have been two models based off their respective segments. She is also the pilot of the RJ Bischof.

A one-of-a-kind woman, she's also a high-strung perfectionist, refusing to make any compromises and often argues with the mechanics who oversee Naglfar. In addition to this, she respects Rapid, the head of the transportation unit, wishing to become friends with her.

She was taught by Naomi, who took a liking to her because she never made a mistake.

Chloe makes her very first appearance in the cutscene of the Extra Ops titled "Christmas Wishes", where she is assigned guard duty at a remote area considered to be Rebel territory with a Hodumi++. Teleko arrives to take some of the trees for Odette. Chloe attacks the Invader, though she finds herself outmatched by the Invader's telekinetic powers and swears revenge on her. Since her machine and communication device were destroyed, she ends up walking through a blizzard; while walking, she encounters a silver-haired child in the distance.

After returning from her mission, she is sent with Beatriz to collect a special eye from a mutated Cyclobster, but soon learn that someone has taken it. Not wanting to mess her perfect record, the two decide to work together to find out who took it.

Sometime later, Chloe is given the RJ Bischof and leads an operation against the Regular Army. 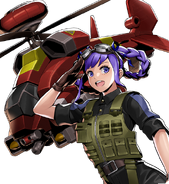 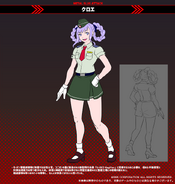 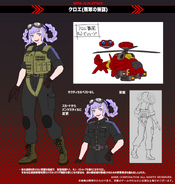