Playing as a cat

Cica is a new character introduced in Metal Slug Attack.

Cica is a young girl who is affiliated with the Ptolemaic Army's Animal Squadron. She operates the living weapon "Koshka", a weapon that originally belonged to Arsinoe via remote control. She likes to act like a cat, wearing a cat costume and enjoying catnaps. She also calls Oao-One "doggy".

First appearing in "Cat Alyst", Cica plays with Lucy by dressing up their weapons to make them look cute, being especially charmed when Koshka shakes off the flowers they placed on it. Arsinoe soon catches up to them and demands she return Koshka, but she refuses and flees. Oao-One's timely, yet unintentional arrival gives her a brief moment of respite. When Oao-One threatens to download Koshka, Cica panics and flees with Koshka after begging for forgiveness with a meow. After gaining sufficient distance, she decides to apologize after a catnap. 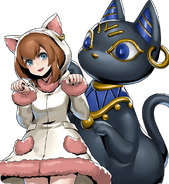 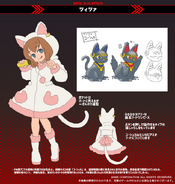