Claris is a new character introduced in Metal Slug Attack.

An artificial lifeform created by the Professor as part of an experiment to synchronize with Rootmars, Claris appears as a teenage girl with green hair. The Professor intended to have her at a age similar to the Gemini Twins, but he was defeated by Abigail before he could release her from her incubator. Claris continued to grow well after the Professor's defeat. Despite growing well past her intended age, she still retains a childish demeanor. She gets along well with the twins.

Claris has powers similar to Aionion, and is capable of summoning space-holes to destroy her enemies.

First appearing in "Portless Communication", Claris is sent to Earth for a learning experience, with Harriot accompanying her. Claris is naturally curious about everything on Earth, much to Harriot's surprise. Seeing that Harriot looked tired from watching her, Claris later ran off into some ruins, running into Abul Abbas and Shizuka. She does not appreciate their harsh words towards her and fights Shizuka, impressing her with her combat skills. Claris takes her compliment with pride and tells Shizuka that Abul is making her uncomfortable, prompting Shizuka to drag Abul away. Harriot later catches up to Claris and tells her not to run off on her own like that in the future. Claris in turn tells her that humans are a funny race.

The Professor later has Claris accompany Malkuth, although her immature and unstable mind constantly causes worry to the humanoid alien. 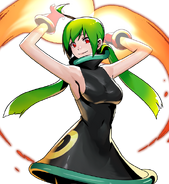 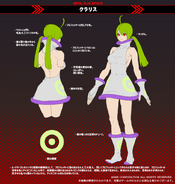