Claudia is a new character introduced in Metal Slug Attack.

A veteran in the Regular Army, Claudia also serves as the army's infantry commander. She is equipped with the highly advanced Aegis Shield, which is even larger than her. Despite this, due to her constant training, she is able to wield it with ease, and despite appearing to be purely defensive, it also serves as her means of offense, with her powerful Aegis Blast annihilating anything in her path, especially if she gets stunned.

She constantly trains to improve herself, and her training has resulted in a toughness and offensive capability that has Marco's seal of approval. She constantly worries about the young members of the Metal Device Project.

First appearing in "Absolute Defender", Claudia meets up with Ashley after a Sky Satan is causing some problems. Claudia asks Ashley to serve as a distraction for the Sky Satan as she deals with the robotic soldiers, an offer Ashley accepts. As Ashley goes off to prepare, Claudia wonders who she should get to support her.

She later spots Maggie cooking for the soldiers and asks her why she is cooking despite not being assigned to. She is unable to stop her however, as Maggie avoids the question and offers her food she cannot resist. Claudia then prepares for battle and her Aegis Shield easily blocks the robotic Amadeus soldiers' attacks as she quickly destroys them. Following the operation, Maggie comes to offer her and Ashley some vegetable curry, the latter of which quickly helps herself to, calling Maggie a mom, much to Claudia's surprise, as Maggie appears to be younger than the ace pilot. Maggie then offers Claudia the vegetable curry, and she finds herself unable to resist as she has no comeback. 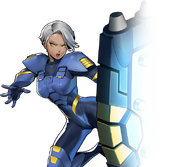 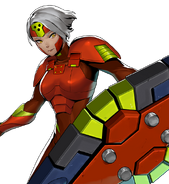 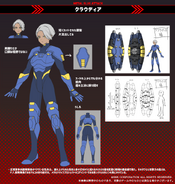