Ruler of the Lovely Mummies

A Royal Mummy Cat that serves the Pharaoh, Cleopatra has an elevated position compared to most of the Pharaoh's warriors and servants. She has her own sect, with her followers being the Lovely Mummies (who have red skin, while the Mummy Cats have blue). It is unknown how many servants she has, but she has two that loyally follow her as comedic relief. Outside of her duties, she is rather carefree with a sharp tongue.

Cleopatra cares deeply for the Pharaoh, having been in a romantic relationship with him for thousands of years, though the two rarely see each other due to their slumber. She will do anything that she sees as beneficial for him, even if it means having to snap him back to his senses by force. Alongside her devotion to the Pharaoh, Cleopatra, alongside the Pharaoh's mummies, guard the ruins from interlopers. She doesn't seem to be openly hostile with humans, allowing them to enter the ruins (as long as they don't disturb them) and having helped Aisha with her troubles.

Like the Pharaoh, Cleopatra also has her own personal arc manned by her sect mummies, though she generally prefers fighting on her platform.

She also has a sister called Arsinoe.

First appearing in the Extra Ops "Pharaoh Rebirth", she is informed by a Lovely Mummy that the Pharaoh is on a rampage. When Scotia battles the Tyrant Pharaoh, Cleopatra appears before her master and manages to calm him down.

She later appears in "Advance of Fire" where she battles Grazia, Destrade and Beatriz as they were sent to reclaim the energy she stole from the Union. They are successful in doing so, but Cleopatra allows them to leave as long as they don't disturb the ruins.

Following her slumber with the Pharaoh, Cleopatra was given a snake-like beast to guard her coffin. Despite having slept for a brief amount of time, she wakes up quickly much to the surprise of her servants, who did not anticipate her coming to so fast. Cleopatra learns that the ruins are under attack by the Rebel Army yet again, although she encounters a different group; Allen Jr. and Abul Abbas. Cleopatra is enraged that they are disturbing the ruins and threatens to smite the two with her powers, finding herself evenly matched by Allen Jr.'s Element Giant. She eventually overpowers it, but Shizuka comes in and takes the two away before she could smite them. Concerned that the humans are able to fight her on similar levels, she decides to visit the Pharaoh with her servants to see what they can do.

Cleopatra appears in the story "Cleopatra's Pleasure Tour", where she wakes up from her 500-year slumber, and learns of the Pharaoh's recent awakening and slumber. With the assistance of her servants, they go on a comical journey to help collect energy to hasten the Pharaoh's awakening.

She later makes an appearance in "Arabian Romance", where she finds Aisha's spirit in one of her Lovely Mummies. Upon learning of Aisha's troubles, she helps her and shows her what romance is truly like by explaining her relationship to the Pharaoh. Upon learning the Pharaoh is on a rampage, she heads out to confront him with Aisha and her other servant. When they defeat him and his accompanying Mummy Cats, Cleopatra and the Pharaoh comment on how long they've missed each other and go into a deep slumber, promising to spoil their servants when they reawaken.

Idle animation, without the platform. 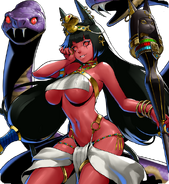 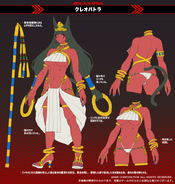 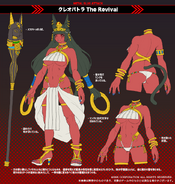 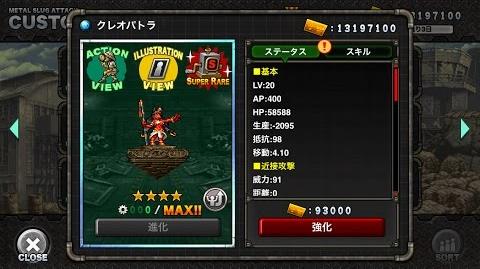