Clone Abby is the Professor's first cloned creation (as the others had already been developed by the Martians). The Professor designed Clone Abby to mimic the original Abigail in appearance and weapon preference, but removed the personality traits that the Professor believed "limited" the her. As such, Clone Abby is cold and calculating, making the most out of any situation given to her, but her robotic personality means that she has trouble adjusting to areas "outside" of her programming.

Clone Abby's success in battle prompted the Professor to create a "sister" for her, called Clone Betty.

First appearing in "Double Face", Clone Abby attacks a Rebel facility containing the newly built Emain Macha twins, the Drache and Tiger Macha. Coincidentally, Abigail is also there checking on the progress of their new machines when she is informed of the attack. Abigail orders the soldiers to prepare the Drache Macha for combat, while the Tiger Macha is evacuated. When Abigail finds the intruder, she is surprised it resembles her, but is swiftly defeated by the clone and the Drache Macha is critically damaged. Clone Abby then hovers over to Abigail and speaks to her, with the Professor speaking through. He tells her that he took Clone Abby out for a test run and is impressed by the results as he withdraws her.

Clone Abby later wakes up Halle and takes her to the Professor, who assigns Halle her first assignment. She assists the newcomer on her mission.

As the war intensified, the Professor upgraded Clone Abby's equipment so she could adjust herself better in battle. She first tested out her new equipment when the Gemini Twins sent her and Betty on a mission to Earth to collect some data from one of the Regular Army's newest plasma-using models. After completing the mission, the two clones returned to base and were greeted with a surprise party. Initially being unable to comprehend the meaning of the party, she ultimately decided to celebrate alongside the others.

Clone Abby appears in "We Are the Mars People Rangers" where she is sent with Clone Betty to monitor the progress of the Mars People Rangers who are testing out the Professor's newly built equipment. The Professor secretly gave Clone Abby a different directive however, and she speeds off on another direction, much to her younger sister's confusion. Clone Abby later runs into Abigail and Beatriz, and her true directive for the mission is to kill Abigail. Abigail sends Beatriz away while she deals with her doppelganger; Clone Abby attempts to strike her down, but Abigail stops her from doing so and the two fight. Clone Abby's lack of personality, along with her precise calculations allows her to triumph over her original and seemingly kills her. She later brings the Martian Rangers back to base, where she watches over the Martians. When Percier gets stomped on by a Mars Mecha, she yells at Clone Abby to watch out for her too, to which the clone coldly replies that the Professor didn't program it to.

Unbeknownst to Clone Abby however, Abigail had feigned death and took advantage of it to create a plan to kill the Professor, which succeeded. 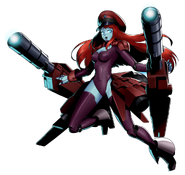 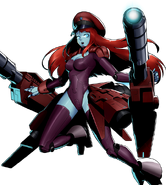 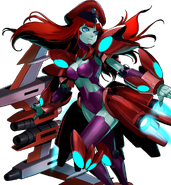 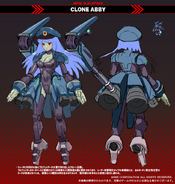 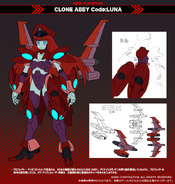