Ringmaster of the Mirage Circus

Cocatrix is a new character introduced in Metal Slug Attack.

Cocatrix is the ringmaster of the Mirage Circus, a traveling troupe that puts on shows and does mercenary work from time to time. She is extremely talented and intelligent, knowing a fair amount in mechanical engineering, electronics, bioengineering, pharmacology and psychology, making the impossible possible.

She wears magicians' attire with a lizard tail as a result of her skills, along with a chicken staff. In battle, she uses her chicken staff to launch a snake at enemies, while her hat also doubles as a magical weapon that engulfs enemies in numerous hands and feet. Her expertise in bioengineering also makes them highly toxic and capable of spreading through enemies. She can also "separate" her legs and "grow" a new pair, sending the detached legs running into hostiles.

She also has a habit of wanting stimulating feelings and often heads to the battlefield to enjoy them, without regard to her own safety.

First appearing in "Shakety Empty", Cocatrix and her troupe are performing at a town when Caroline sneaks backstage and causes havoc after seeing a pendulum. Hearing the commotion, she and Bunny realize that Caroline is with an army and manage to trick her into signing a contract that would allow them to claim some new weapons. Trailing Caroline back to the base, Cocatrix and the others end up fighting the Ptolemaic Army, but are able to escape with various spoils of war.

Cocatrix later meets Charlotte in some ancient Easter-themed ruins where she takes a liking to the young girl, offering her a paid ticket and a spot in the Mirage Circus.

While looking for new ideas for an incoming show, Cocatrix sneaks away from her fellow members and runs into Hisui. When she witnesses warding magic, she becomes interested and asks Hisui to train her. However, she has no interest in pointless fights, so Cocatrix riles up her interest by alerting a horde of Golden Walkers and a Golden Trolley. After eliminating the weapons, she leaves with Bunny (who had come to look for her), but not before asking Hisui to continue supporting the Mirage Circus and giving her two tickets for both her and friend. 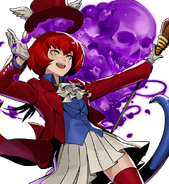 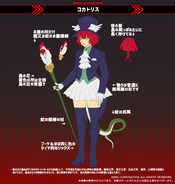