An artificial lifeform created by the Professor, Marionette:Un takes on the form of a female humanoid. She is able to manipulate gravity with her hands, creating wormholes on a whim with a flick of her hand, sending bursts of energy to destroy her opponents, or diving down into one for protection in a manner similar to the Gemini Twins. She can also "supercharge" herself to emit a blast of devastating energy to any enemy next to her.

Due to having Rootmars' DNA, the Mars People flock around her as it reminds them of their leader. She dislikes being used on a whim and looks down on humans and even her creator for their curiosity, but protects him out of gratitude.

First appearing in "Jumper", the Professor tasks Marionette with destroying human equipment, sending her to a Ptolemaic base. He reminds her that humans are creative and not to underestimate them. Marionette teleports herself into the base, only to be caught instantly by Caroline and Towa, the former having anticipated her arrival due to recent attack patterns. Marionette launches an attack at the two mechanics, but Caroline's newly built Space Wall Drone protects them from her attack. Caroline then sends a Space Quadro Jumper, which somewhat damages her. Marionette, having grown tired of their fight, unleashes a burst of energy, before realizing she expelled too much energy, causing the base to collapse on them. She is continually hit by falling debris and watches the two mechanics escape, believing that she has accomplished the Professor's task as she leaves.

When Unsigned comes to reclaim a stone taken from the Regular Army, the Professor has Marionette accompany it. Marionette is upset by this and demands compensation from Unsigned for using her and mocks Midori for being weak as she takes the stone from her. Midori tracks Marionette down, only for Unsigned to tell Marionette to go easy on the young mechanic because it and its Bonenoid army have taken a liking to her. She reluctantly follows its orders (while demanding extra compensation) and defeats Midori with ease, sparing her per its request. She then states that she dislikes humanity for their frailness and curiosity, before leaving with Unsigned. 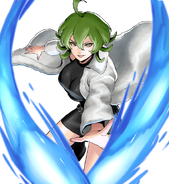 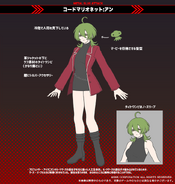 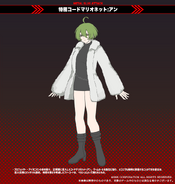