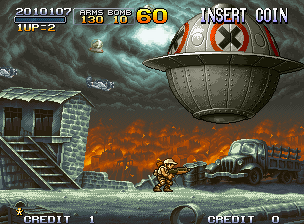 The Dai-Manji is the penultimate boss in Metal Slug 2/X.

The Dai-Manji is much larger than the Mini-UFOs and boasts significantly more armor and firepower. From its bottom hatch, it can send Mini-UFOs or fire a deadly ray of electricity at its target. It can also launch energy bolts to carpet an area, much like the Hi-Do, when at critical health.

After sustaining enough damage, it will attach itself to the Martian Mothership, Rugname, which increases its lethality even further. The connected Dai-Manji now fires a large laser beam directly below and dispatches elite Mini-UFOs.

Once the Rugname is destroyed, the leftover Dai-Manji explodes dropping the captured Morden (cuffed up to a table in his underclothes).

A Dai-Manji appears after the fight with the Hi-Do carrying a tied up Morden and picking up the captured player via tractor beam before leaving.

Three more Dai-Manjis show up attacking the player in space although with lower armor. The last one alive will attach itself to the Rugname like the previous game. Destroying it gains entry to the Rugname.

The Dai-Manji is the final boss. It attacks by firing a laser beam directly below or dispatching Mini-UFOs.

The Dai-Manji only appears in the games' credit sequence rescuing Morden and two of his soldiers from falling into the lava. It then drops them off to safe ground to fend for themselves before leaving.