Destrade was originally a mercenary that was renowned for her bravery in battle. This prompted Allen O'Neil to find and recruit her to the Rebel Army's cause. Because he respects her greatly, she likewise shows a large amount of respect for him.

Her obsession with strength leads her to practice daily so that she can become even stronger. As such, she appreciates strength and gets along well with those who prove their strength to her.

She is also a member of Allen Platoon and serves as Allen's second-in-command, often testing recruits herself to see if they are qualified to join the battalion. In battle, she wields a massive gauntlet on her left hand that fires bullets and missiles.

First appearing in the Extra Ops titled "No Limit", she is deployed into battle to fight the Ptolemaic Army. Upon hearing that Allen O'Neil has been grievously wounded, she presumes him killed and attempts to avenge him by killing Caroline, the highest ranked Ptolemaic in the battle.

Overwhelming Caroline and attempting to land the finishing blow, she is blocked by Yoshino, who evacuates her comrade. Destrade's grief is dissolved by the re-appearance of Allen, who reminds her that he is the Immortal Devil Sergeant and that mere impalement and electrocution (i.e., the attacks of Caro's Augensterm) can't finish him. This prompts her to bearhug him, unintentionally causing additional injuries.

Sometime after this she is temporarily assigned to the Blaze Brigade by Allen O'Neil to help Grazia and Beatriz recover the lost energy that Cleopatra stole from them during her "adventure". The mission is a success and Cleopatra allows them to leave after a short battle as long as they stay quiet.

When the Invaders attack the Rebel 7th base, Destrade and the rest of Allen Platoon arrive to drive them off with their sheer strength. When Beatriz attempts to pass the responsibility of cleaning up the base to Loretta, Allen O'Neil allows her to "teach" Beatriz a lesson.

Destrade is later seen training with Conny. Conny attempts to lunge a dagger into her neck during the session, which impresses Destrade as she shows no hesitation in going for a weak spot, but she reveals to her that she has trained herself to be perfect and thus has no weak spots. In the following operation, Destrade and Huracan notice an explosion and head to investigate. They find an unconscious Conny (who had been caught by the blast) who is having a nightmare. Destrade notes to give Conny some "serious advice" after realizing that she is a kleptomaniac. Huracan suggests waking her up, but Destrade refuses, believing that she should conquer the nightmare herself.

As Allen O'Neil goes off to fight some Invaders alone, Destrade is briefly called away with Huracan and Conny by Abigail as she has a new member to introduce to them; Nantes. Though Destrade appreciates the extra manpower, she states that there's no time to properly train her. However, she is impressed by Nantes' optimism and they all rush to the battlefield to support Allen. They slay numerous Invaders before Destrade has Nantes fire her tank at full power; due to her strength, she easily survives. After Allen compliments Nantes, Destrade asks Huracan to take Allen to the combat medic. Huracan then asks her where Conny is, and she points a fair distance away to an unconscious Conny, remarking that she will need to be retrained with Nantes when they get back.

Destrade is sent on a mission with Huracan in regard to the Mini-Bata. The pair are confronted by Towa, who wishes to get her hands on the phantom machine. Huracan is impressed with her honesty, though Destrade reminds her not to be too sympathetic. The pair are able to defeat her; Destrade believes that Huracan is still going easy on her, though Huracan reminds her that the Mini-Bata cannot take any more damage. Destrade is surprised by her persuasion and orders the platoon to retreat.

Sometime later, Olga joins the Rebel Army. Destrade is impressed to have a subordinate like her, although she has to remind her to keep calm. During one sparring session, Olga asks her to not use her flames, prompting Destrade to tell her if she's fine with the mechanic yelling at her later. Before they can go at each other, Destrade spots a strange tank behind Olga.

In the story "Why We Fight", where the Regular attack to obtain the "Iron Nokana MK2". Destrade, remembering her previous encounter with Tyra, tries to attack her but is stopped by the Slug Gunner piloted by Tarma.

In the story "False Peace", Destrade is introduced to Huracan and duels her to see if she is fit for Allen Platoon. Both women are unable to defeat each other and Destrade is impressed with Huracan despite her small size. She and the rest of the platoon head to a remote island to confirm rumors of a tribe being capable of controlling monsters, and to secure the Huge Hermit. When they arrive, they encounter a young woman who taunts Huracan over her decision to join the Rebel Army. After capturing the Huge Hermit and retreating, Destrade asks Huracan why she joined, but does not get a response. She reluctantly helps Navy with moving the Huge Hermit. As she goes to place a new barrier, the Huge Hermit tries to attack her; she responds by grabbing its claw and slamming it against the wall, possessing a power level even higher than the creature. Huracan jokingly asks if Destrade is a mutant, causing her to become visibly shocked and run off to one of the more isolated wings to wait for Allen.

In the story "Scrap Memory", the Ptolemaics attack a Rebel Army facility to steal the Sergeant Drill. Destrade, remembering her previous encounter with Caroline, tries to attack her but is stopped by Yoshino. Yoshino ends up defeating Destrade in the ensuing battle.

In the story "My Hero", Destrade and Huracan are tasked with seizing equipment from the Metal Device Project laboratory. They find the equipment on Ami, and the two quickly acknowledge the threat of her weapon despite her inexperience and attempt to capture her. Despite their efforts, she manages to escape. Several days later, Destrade fights Perche and pretends to retreat to fight her weaker allies. With Huracan and Allen O'Neil, they unleash the Hodumi+ on them, though despite their efforts it is destroyed. Destrade takes a severe injury while trying to fight Ami. 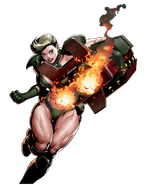 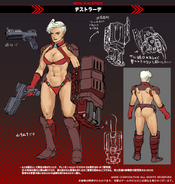 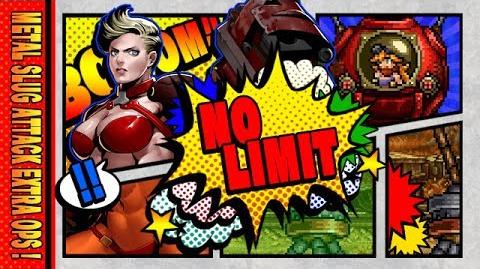 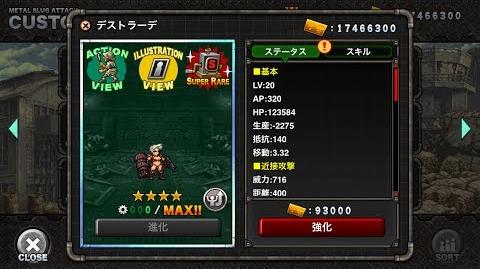