The Division 6 (Japanese: 師団6) is the only division of the Japonese Army remaining after the Second Modern War and a minor enemy division in Metal Slug 3 and Metal Slug Advance.

At the beginning of the Second Modern War, the division was sent by the Japonese Army to South America/Mexico and tasked to lead an offensive against several Regular Army's troops located there. Unfortunately, the division's equipment was rather ancient and unreliable, leading to its annihilation by the Regular troops.

The surviving members of the Division 6 retreated to the Desert Ruins to create a temporary hideout able to store their remaining vehicles, equipment, rations, etc. Their plan was to stay hidden from Regular troops long enough until they can receive reinforcements from their army. However, the orders never came due to the lack of a radio station, so the Japonese soldiers decided to decorate the hideout to kill some time, while still hoping to be located and aided by friendly forces of the Japonese Army.

While staying in their hideout, the soldiers encountered a severe problem: gasoline shortages. To resolve this problem, they began to modify their vehicles to function without fuel. Then, the high-ranked soldiers designated several soldiers to operate the modified vehicles by either piloting or carrying them.

The soldiers then created huts capable of storing a large amount of equipment, food and tools. They also constructed a small amount of wooden cabins reminiscent of the ones seen in Japan to live in.

The soldiers managed to survive by conserving their rations for the longest time possible and by creating their hideout near an underground river for water supply. If they ran out of supplies, they would sneak out of their hideout to capture a few Regular soldiers in order to steal their rations and keep them as POWs.

By the end of the Second Modern War, the Japonese Army surrendered to the Regular Army, leaving the Division 6 unaware of the end of their involvement in this war.

In 2031, the Third Modern War began and the soldiers of the Division 6 were still calmly living in their hideout. When P.F. Squad and S.P.A.R.R.O.W.S agents discovered the hideout during a mission in Mexico after clearing a wave of Man Eaters, they were attacked by the Japonese soldiers thinking that the war is still ongoing and proceeded to attack the Regular agents, leading to a long fight between them.

Units of the Division 6

Two soldiers from a sheet of the characters from MS3 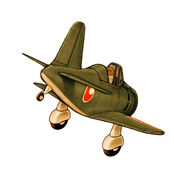 A soldier from one of the MS3 wallpaper