The Doll is a purple, high-tech, latex bodysuit. First worn by Nadia, this suit was equipped with unknown weaponry.

The Doll was later updated to be in line with the Metal Device. It has various external weapons and transport controlled by a nerve interface. Unfortunately, it also has the same drawback of depleting enormous amounts of energy. The current wearer, Fio, is always ravenously hungry.

Fio's Doll is stun resistant. When attacked with stun-capable weapons, she instead raises her arms to block projectiles before firing two shots from her rear cannons. 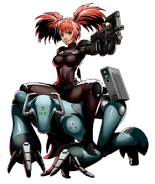