Drache is the youngest of the three Goldenes sisters, and the second one to arrive on Earth. Compared to her older sister Biene, Drache takes on the form of an extremely massive humanoid. In battle, she uses her raw strength to obliterate enemies.

She is very naïve; showing concern for humans after accidentally trampling their homes, and likes to have things done her way, such as being addressed properly. Like her sisters, she is obsessed with gold. She also has a unique obsession for sparkling things. Her massive size means that she can easily destroy planets in an instant if upset.

First appearing in "Task Force 13th", Drache is sent to Earth with Barbeln as her guide. She learns that there are some ruins with gold and decides to head there. In part due to her massive size, she accidentally crushes two towns on the way, which gets the attention of the Regular Army.

Arriving at the ruins, Drache is forced to crawl her way inside because of her massive size. She is then attacked by MS-Alice and MS-Heart, but their attacks do not harm her in any way, while she herself enjoys getting tickled by the sparkly weapons. Although she puts up a small fight, Barbeln instructs her hold back or she would entomb them all in the ruins. Before the fight could take a turn for the worst (as Drache begins forgetting what she was told), Barbeln intervenes to drive the AIs away. Drache then proceeds to hug Barbeln for being sparkly, nearly suffocating her in the process. 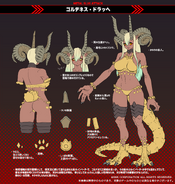