Draco is a new character introduced in Metal Slug Attack.

Draco is a Martian lizard. There are likely more of its kind on the planet, and they appear to have good relations with the Martians on the planet. It befriended Pocke. While incapable of speaking the human tongue like most pure Martians, Pocke is able to translate its speech.

In battle, Draco is summoned by Pocke, who carries a capsule that brings him straight to the battlefield. This is also used as an escape measure if the battle becomes too dangerous for it. It is capable of regeneration and uses both its mass and fire breath to attack enemies.

First appearing in "Road to Everlasting Summer", Pocke calls Draco to participate in the annual Ride Fight, a space competition. While preparing for the competition, Draco is upset that it isn't doing well, but Pocke reassures and motivates it to continue trying. The Gemini Twins, who also accompanied the two, also choose to participate by wrangling a local Sea Dragon for the competition. Draco assists in capturing the Sea Dragon and later spars against it in the tournament, being declared the winners when the twins are discovered to be cheating and disqualified. 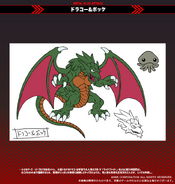