None
Dragunov is a new character introduced in Metal Slug Attack. She first appeared during the Extra Ops titled "Code: Assault".

Due to her cold and harsh personality, she was able to be promoted as one of the commanders in the Ptolemaic Army. She is extremely strict with the rules and cares with the army's wellbeing, even betraying her superiors if they threaten them.

She is on good terms with most of the Ptolemaic personnel, mainly due to adopting a caring, but no-nonsense attitude towards those under her command. During the inception of the Ptolemaic Army, Dragunov took care of all of her men, even staying behind to cover their escape. During this time, she also recruited Yoshino and became friends with Caroline.

Despite having lost her left eye in an unknown incident, it has not hampered her in any way - she is still one of the best snipers in the army. To denote her status as a high-ranking commander, her Hover Unit is customized to fit her needs. She obtained a new Hover Unit when she started her rebellion.

In her first appearance she is sent to investigate and retrieve a "Mysterious Box" that was kept by Amadeus. She managed to defeat him, but Amadeus activated a self-destruct sequence and the box was lost in the ensuing chaos.

Later on she saves Yoshino from multiple self-destructing Amadeus Robots after she dismantled the Toschka Dalanue.

In a battle against the Rebel Army and a newly built Tani Oh, Dragunov orders a retreat after it proves to be too strong for them. Simon, a sniper assigned to her command by Mira, takes out the Tani Oh in a single shot, allowing the Ptolemaic Army push back. Dragunov comments on her skills but still states that she disobeyed orders, so she puts her in solitary confinement as punishment.

Dragunov later partakes in a rebellion against Mira and Ptolemaios, suspicious with their intentions with the army. She asks Yoshino to help track Ptolemaios and contacts Owen to spy on Mira.

Partaking in her own investigation, she tries to find proof that Mira does not have the army's intentions at heart. While investigating, she bumps into Grazia and Loretta, the former of which sends a modified Big Shiee against her. Dragunov realizes they have no connections to her and destroys the Big Shiee before resuming her investigations.

After Caroline gets captured by the Rebel Army once again while out on a scavenging run, Dragunov sent several bodyguards to keep an eye on her, but informed Dion in advance that she would not try to rescue her. Caroline eventually returns to the army with the help of an unaffiliated party.

During an operation against the Rebel Army, Humphrey participates in the operation, allowing Dragunov and her men to obtain some scrap metal. Checking in on Humphrey, she finds him wounded and orders him to stay put as she leaves to get some medics.

Sometime later while conducting her war against the cult, one of the cult's members, Lithos, tries to join her rebellion. Dragunov initially refuses due to her ties to Ptolemaios, but the two are suddenly attacked by Martians for stealing from the Rugname. Upon seeing Lithos' resolve, Dragunov accepts her offer, immediately impressed by Lithos' ambition to surpass her, appreciating the new competition.

While out on a mission, Dragunov is contacted by Yoshino, who tells her that Sho learned that Ptolemaios acquired an ancient treasure that has knowledge of ancient species. She is alarmed with this discovery and decides to take down the treasure herself as Yoshino sends her the scant information they have on it. Upon arriving at an Invader facility, she finds the treasure take down a Blobsphere. Believing it to be exhausted, Dragunov then tries to snipe the treasure, but it had already been alerted to her presence and subdues her before she could pull the trigger.

She first appears with Yoshino and Caroline to steal the Big Shiee as the army is low on materials and they are forced to scavenge for them. The mission ends in failure and she is wounded by Allen O'Neil, but is brought to safety by Caroline.

Sometime after the failed mission, Caroline learns of the Crablops and has a desire to look at it. She puts herself in danger multiple times and Dragunov disciplines her before realizing that she was too strict on her. The mission is partially successful as Caroline shows that she is capable of being a commander, despite not having obtained the Crablops since it was booby-trapped.

Dragunov later goes on a vacation with Yoshino and eventually overhear that they may have a wish granted if they bring the Martians to Rootmars. The two work together to claim as much as possible, but eventually lose them all after being defeated by Trevor and Abigail.

She later encounters Towa stealing from their scavenged materials and attempts to execute her, but Caroline stops and begs her to spare Towa. Dragunov reluctantly accepts, warning Towa that she would have shot her were it not for Caroline's pleas. She tasks her with accompanying Caroline, and is surprised when the two return with a Tani Oh.

Dragunov later leads a secret rebellion against Ptolemaios due to believing that he has suspicious plans with them. She also assures Simon that she doesn't have to go back to Mira, as she now answers under her. Simon agrees to this. 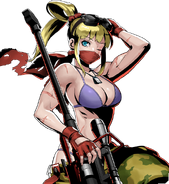 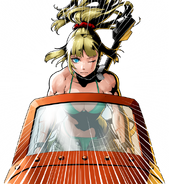 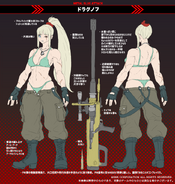 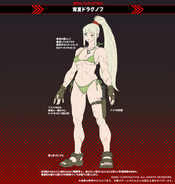 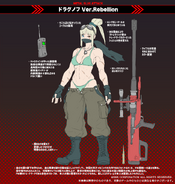 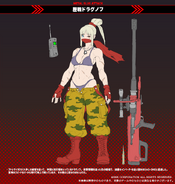 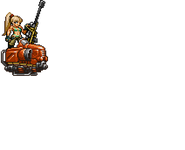 Win animation (with their Phone) 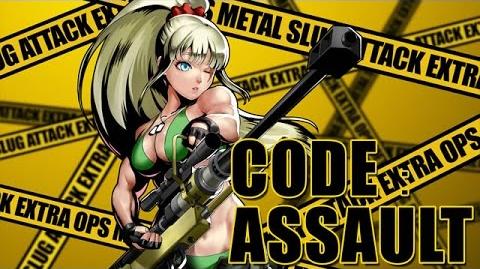