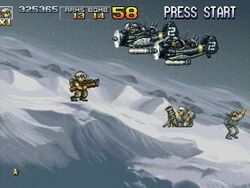 Eaca-B is an enemy in the Metal Slug series. It is the rebellion's main fighter bomber.

The Eaca-B is an air-to-ground fighter used by the Rebel Army, making most of their air force along with the Flying Tara. Fast and versatile, they are weak against anti-aerial fire. They carry self-propelled-heat-seeking bombs which serves as their main firepower, but in the last mission of Metal Slug 3, they fires semi-homing missiles to the player, but in Metal Slug 2/X final mission while they battle mini UFOs they are shown using their machine guns.