Originally a normal Di-Cokka, Eight Eight was born when it was used to transport Martian bacteria from the Metal Fusioner No.223 as a result of logistic problems. The Di-Cokka gained a form of sentience and massive strength in the process, albeit it acts childish. Despite being made from Martian bacteria, it has the voice of a parasitic Invader.

It picked an unnamed, low-ranking female mechanic from the Rebel Army as its caretaker. The mechanic gave it the name Eight Eight (in reference to the numbers on the side), addresses it as male and gives it emotional training.

In battle, Eight Eight usually fights with its mass and is capable of generating powerful tornadoes that can send enemies flying. If the battle becomes too dangerous, it reverses course and flees the scene crying. It primarily shows three expressions - happiness, sadness and anger.

First appearing in "Task Force 16th", Eight Eight goes out for a "walk" and discovers the Invaders setting down a King's Cocoon. It returns to base and warns its caretaker of the threat, who then sends the report to Katalina. During the operation, Katalina and Franke, as scientists, come to the conclusion that there is no explanation as to how Eight Eight came to be. Both Franke and the Purple King also note that Eight Eight's voice is that of a parasitic Invader. It sends the Invaders and the cocoon flying away with its tornado attack. When Katalina remarks that it blew the cocoon away, Eight Eight is worried it had upset her, but she states otherwise. The mechanic then arrives to check on Eight Eight as it performs victory tricks, only to stop when Katalina expresses an intent to disassemble it with the mechanic, but soon learns that it was a scientist's joke.

It is later mentioned by Olga who tried to rile Eight Eight into fighting with her.

After the Creek Slope is deployed, Eight Eight brings the mechanic with him so he could accompany it. The carrier is set upon by Fedeln Metzelei, with Pauline directing him on his newly-acquired powers. Eight Eight tries his best to fight, even holding his breath to avoid inhaling Fedeln's poison, but the mechanic eventually convinces him to retreat. 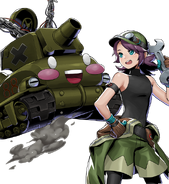 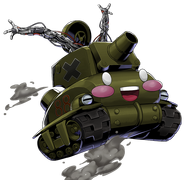 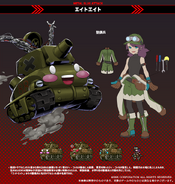