Eis is the younger sister of Geweih Metzelei. She is a member of the Pentagram, a group of Invaders that determines how the Invaders are sent for their space invasion plans.

Unlike her older brother, who specializes in extreme heat, Eis is the polar opposite of him, as she specializes in extreme cold. She generates bone-chilling ice all around herself, walking on ice to keep her beauty and generates deadly shards and tornadoes to attack enemies. She does not get along well with him due to their contradicting personalities; Eis is very ruthless and loves collecting beautiful stars, while considering her brother to be too moralistic.

First appearing in "United Front the 35th", Eis decides to go to Earth. She is given Odette as her guide and the two land on the plains where Geweih had set down in during his first arrival. Eis is not impressed at first, but after Odette brings her to some humans, becomes captivated by the beauty and fear instilled by freezing them and sets out to freeze as many humans as possible.

She eventually comes across Beatriz and Grazia, expressing a greater desire to turn them into sculptures due to their vigor. Before she could do so, her brother drops down and reminds her that she can't selfishly decide Earth's fate as a Pentagram member. Eis quickly loses interest from her brother's words, but expresses an intent to return in the future. 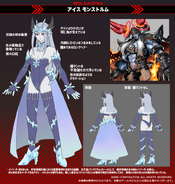