The Elder Centipede (or the Sea Worm) is the fourth boss of Metal Slug 6.

The Elder Centipede is a mysterious sea creature that has been existed since ancient times. This gigantic creature is believed by some biologists to be an ancient arthropod due to the unknown microorganisms that are attached to it. With its ability to attack moving objects and inject lethal microorganisms, many militaries from each nation believe that it could be used as a biological weapon in space.[1]

Most of the attacks aren't really that hard to dodge, but the Elder Centipede will be constantly changing position, so be ready for a difficult fight. When it appears, depending on the difficulty, it will start off by spitting about 3 to 8 acid spit projectiles at the player, so go underneath its head to avoid these. Get away when it stops, though, as it will begin to spiral in a circle off the screen and kill the player if caught in the middle. It will reappear on the right, spiraling towards the player. Jump on to its body to avoid being skewered by its head.

The Elder Centipede floats upright and fires a few more acid spit shots at the player. It then twists its entire body around, causing razor sharp wind to appear around each segment. A well timed jump avoids this.

Again, it will spiral in a circle, so the player must make sure to not be stuck in the middle. It reappears the left side, and will spit a trail of acid spits which goes up and down the stage. Hide under the Big Shiee to avoid this. After this, it repeats until half of its health remains and starts to combust.

When it's flaming, it will spiral around the center, firing five energy blasts at the player. Just dodge over these or shoot them, and finish it off. If the Slug Flyer is still available, this battle is made easier/harder depending on the player's skill as the Elder Centipede will spit its acid much faster.

The Elder Centipede appears in Metal Slug Attack in the Extra Ops "Task Force 2nd" sharing a similar moveset as in the original game but is unable to generate razor sharp wind on its body. It also possesses the ability to weaken the attacks of enemies and lower their resistance to other attacks, causing them to take more damage than usual while also receiving less damage itself. Since the Elder Centipede now fights on land, it moves by dragging itself partially buried through the ground.

The Elder Centipede is further mentioned as an unaffiliated unit (not with the Invaders). The micro-organisms on its body contain an extremely deadly virus that weakens opponents (hence its skills in-game).

The Elder Centipede spinning its segments.

The Elder Centipede coming out from the sea. 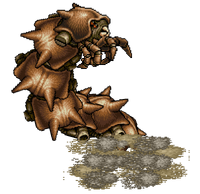