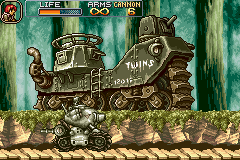 The Emain Macha is the second boss of Metal Slug Advance.

They are also called The Twins. The first one is green-colored while the faster second one is red-colored.

Both Twins can only be damaged by hitting the turret.

The first phase of this fight takes place against the green Emain Macha. It will move from one side to the other while shooting explosives from its turret that fall to the ground and burst into flames, damaging the player if they touch it. In addition, Bazooka Soldiers will constantly spawn and fire at the player until the tank is defeated. Luckily, the green Emain Macha is slow both in moving and its rate of fire, allowing the player to easily avoid its attacks.

Once the first tank is destroyed, the red Emain Macha will take its place. The red variant moves faster and its firing rate is quicker than that of the first tank, and also uses Bazooka Soldiers. As well as firing more explosives, it will maneuver from one end of the screen to the other, firing multiple shots as it moves creating a line of fire. The player must run away from that side of the screen to avoid being engulfed in flames.

Special Forces Soldiers will occasionally spawn in on top of the tanks. Killing them will drop a Laser Gun, making this fight much easier to win. Quickly defeating this boss unlocks the Emain Macha Card.

The Emain Macha appear in Stage 8 of the Red Alternate World. Alongside the turret, both are able to grind their enemies with its treads. Although both are considered one unit, the Green Twin is deployed first while the faster Red Twin waits at base until the former is destroyed. Both tanks share the same amount of HP (30,000).

The Emain Macha return as playable units as well as the Wednesday-Thursday boss in the Day Specific Mission. The Twins work the same as in its predecessor. However, the Red Twin has its HP at a percentage of the Green Twin which can be increased by leveling up the 1st Skill.

New variants are introduced. The Drache Macha and Tiger Macha are independent units but can boost each others' attack and HP by placing both of them in a deck.