Fedeln is a humanoid butterfly affiliated with the Invaders. He is the second of the Metzelei Four, though how he obtained his rank remains unknown. He has extremely potent poison; just being close to him can melt even the most strongest suits in mere seconds and he has occasional blasts which he cannot control. As a safety measure, Fedeln is closed off from his fellow Invaders, and thus lives a lonely life. Though he has no ill intentions, he is somewhat loony due to his isolation, seeking friends and is slow to feel pain.

Fedeln is disliked by most of the Invaders, especially Bloom Metzelei because he killed one her "children" in an unspecified incident. Only three Invaders are on good terms with him - Bersek, Franke and Barbeln.

Fedeln first appears in "Butterfly Disaster", where he is paired with Nowan on a mission to Earth. During the confrontation with the Ptolemaic troops, Caroline shoots an unknown bullet at Fedeln's wings. As if a miracle, it stopped his wings from seeping poison. Fedeln then happily puts himself on open fire. Nowan begrudgingly intervenes as they don't want to be scolded by Annette for letting a vital member of their army die, and covers their escape with multiple fissions. At space, Fedeln asks Nowan to accompany him to Earth again, having enjoyed the experience, which they flatly refuse, causing him to remark that they are cruel.

He later appears in "Try Line 2nd" where he, along with Schwarz accompany the Great Mother into a battle between the Rebel Army and Martians. After the Great Mother is wounded, Fedeln remarks that he wants to hug her as she recovers, but Schwarz states that she doesn't like him. Fedeln then tries to hug Schwarz, only to have her run off.

In "United Front the 8th", Fedeln approaches Schwarz and Franke after the latter wants the former to accompany her to Earth to collect more test subjects. He accidentally subjects Franke to some of his poisonous scales, and convinces Schwarz to tag with Franke after telling her that their leader learned of a new golden unit and requested samples from it. When the two leave, he giggles, suggesting that he had his own reasons for approaching them.

He later learns that Bloom has visited Earth, and finds Bloom fighting Grazia, Loretta and Norah. Bloom is incensed by his presence and demands he leave, but he refuses and continues to approach her, prompting her to clip his wings off. In part to his loony personality, Fedeln does not notice the pain, instead asking Bloom for her honey. Bloom refuses and storms off, prompting Fedeln to chase after her.

Fedeln later regrows his wings and is sent with Bersek to Earth to retrieve a core. Fedeln attempts to inquire about Bersek's past, but he is denied by the human, as the topic makes him uncomfortable. Upon destroying a Mirage Shiee holding the core, Fedeln inquires about his past again and is denied. Bersek soon hears movement takes Fedeln with him, much to the Metzelei's surprise. The two are able to leave before they are discovered, though Fedeln unintentionally poisons Bersek in the process.

While on a mission to Earth, Fedeln encounters several Ptolemaic forces who attack him on sight. Still having not found a friend, he wonders if he could ever have one when Barbeln arrives to save him. Fedeln is surprised by her sudden appearance, while Barbeln in turn is surprised he became a Metzelei. He reminds her of his poison, only for Barbeln to state that she has built up natural resistance to it, and she suggests he retreat while she deals with the enemies. He then reminds her that he has a higher rank, but he complies with her request and leaves, bumping into Sally. He tries to befriend her despite the obvious murdering intent she has, but Barbeln soon arrives and states that he needs Invader friends as she takes him away.

After Barbeln gets injured tried to protect him, Fedeln awakens new powers. He is visited by Pauline, who had been tasked with helping him by the Professor. Pauline guides him into learning how to use his powers, in which he tests them on a passing Creek Slope and Eight Eight. Despite her guidance, he continues to show reluctance as he could sense the presence of an Invader from Eight Eight. After the Rebel Army retreats, he decides to pay a visit to Barbeln.

He makes a small appearance in the "Fall of Disaster" story where Schwarz calls him for a ship, but he gives her a sob story instead. 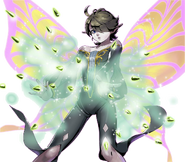 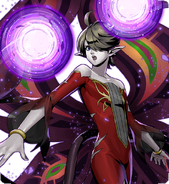 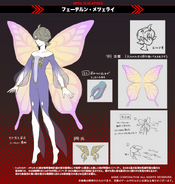 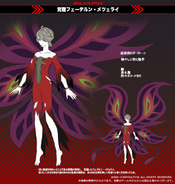