No information
First Baby is a new character introduced in Metal Slug Attack.

The original version of White Baby, First Baby is an AI resembling an adolescent female. The Doctor locked her away in the deepest parts of his files, with no contact whatosever after realizing that she was too dangerous to let loose. This made her insane and have a desire to break her enemies apart. White Baby would eventually break out from her prison. She sees White Baby and Iron Fortress as her younger siblings and is very protective and affectionate towards them both.

First appearing in the Extra Ops "Sky King", she is freed by White Baby and the two decide to cause some mischief by attacking a Sky King. They severely damage it, after which Navy attempts to hack First Baby, but White Baby removes the program before it can fully control her. First Baby thanks her for the timely save.

Later on in "United Front the 10th", she is seen with the Iron Fortress trying to figure out what is wrong with White Baby. She tries to look around but is repelled, before stating that she is more interested in the golden weapon heading their way. Arriving at the battlefield, First Baby helps her younger sister out.

When Iron Fortress runs away from the Amadeus Syndicate, First Baby goes out to find her. She finds her sister being attacked by Allen Platoon, and promptly saves her, ordering her to run as she handles her attackers.

The Doctor later decides to seal First Baby away once more, due to her unpredictability and the inability to understand the truth that shapes human society, much to White Baby's disappointment. As she is sealed away, she somehow ends up at a Regular Army base, startling MS-Heart and Midori. With a vastly different personality, First Baby proclaims that she will protect them if humanity will not. Her arrival is met with a hostile response, with Midori running a Slug Copter against her. She easily destroys it, but soon hesitates as she begins to revert to her original personality. Midori later purges First Baby from the Regular Army system, as the AI wants Amadeus to love her as she fades away.

She makes an appearance in "Random walk rather than capreca number", where she tries to find Iron Fortress after she runs away but is unable to. Following her return to the base, she consoles her. The story's secret ending also reveals that the Doctor sealed her away because she was too dangerous, even though she only wanted to show affection to her creator. 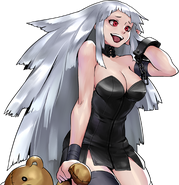 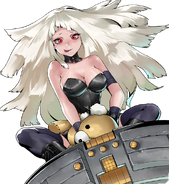 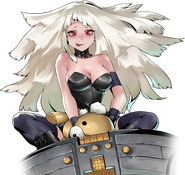 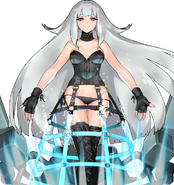 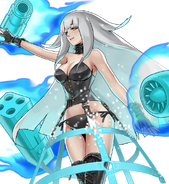 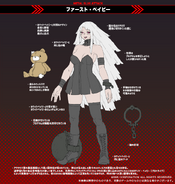 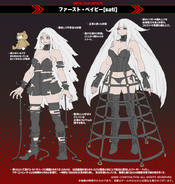