Fluffy is a new character introduced in Metal Slug Attack.

Fluffy is a young woman who works in the Rebel Army as an engineer. She created the "Fluffymeranian", a modified Fortmeranian that also makes use of old military equipment. Apart from launching missiles from the enemy, it is also capable of somewhat repairing itself.

She also enjoys being an idol much like Beatriz and Vicky. While she is still a newcomer to the scene, she has slowly amassed followers and was given some staff from Beatriz to help out with her goals. The Fluffymeranian is used as her performing stage.

First appearing in "United Front the 36th", Fluffy is sent on a United Front operation with Vicky. She is given some of Beatriz' subordinates to help out in her performance. At the battlefield, apart from attacking the enemy, she also performs for them, getting the attention of both the Rebel and Regular armies. After the operation concludes, she is about to conclude her performance with Vicky when Beatriz arrives, telling them to continue performing as Abigail had taken notice and approves of their show. 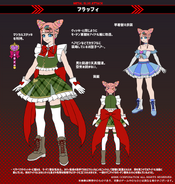