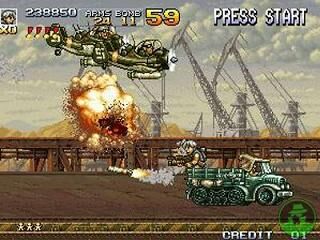 Flying Tara is an enemy in the Metal Slug series. It is a rebel bomber airplane .

A secondary airplane used by the Rebel's air force, the Flying Tara is mostly a variant of the Eaca-B, with better armament and maneuverability. They only carry a single heavy bomb with them, after throwing it, they fly to the background, and then return with another bomb (Metal Slug only). But in other games, they shoot the same missiles as the Eaca-B.