Franke is a former human scientist who admired the Invaders so much that she grafted half of an Invader onto herself. She's somewhat mad and wants to create a new breed of human-invader hybrids like herself. She uses an advanced battle suit since she is not as good in hand-to-hand combat like the other prominent Invaders.

First appearing in "United Front the 8th", Franke tries to create another human-invader hybrid but fails as both subjects die. She calls in the next pair, only to realize that they are out of humans. Schwarz comes in and asks to be fed, but Franke tells her they are out and unsuccessfully manages to convince her to come to Earth. Fedeln soon arrives and persuades Schwarz to join, who Franke promptly thanks for convincing her. Upon arriving at Earth, she collects a large quantity of humans. As the two are about to leave, SV-001s ambush them and a missile rips off half of Franke's face, causing her to lose consciousness. When she recovers, she notices that half of her face is missing and her pockets, which she filled with United Coins, are empty. Schwarz reveals she ate them, commenting that they were tasty.

Sometime later, Franke returns to Earth for a new experiment. However, she finds that Schwarz is missing and sets out to search her. Upon finding the Metzelei in combat with the humans, she halts the operation and orders a withdrawal. Franke is left with a gaping hole in her body by Schwarz, but she shrugs it off and leaves, warning the humans that they won't be as lucky next time.

Franke later accompanies the Purple King as the King's Cocoon is set underground, curious as to why it is being laid at this specific spot and as to why they need it. They are soon confronted by Katalina and Eight Eight, the latter being a sentient Di-Cokka. She immediately takes an interest to the tank and confirms with Katalina that there is no reason as to how it came to be, while remarking that it has a parasitic Invader's voice and that they did not create the "AI". She is later blown away with the Purple King and the cocoon by Eight Eight. 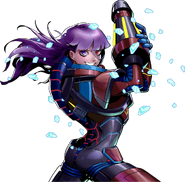 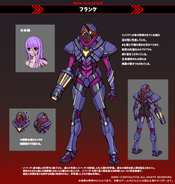