The twins comprise of Gemini White and Gemini Black, much like the constellation they are named after. Gemini Black specializes in melee combat, using a customized buzz saw to attack its enemies. Gemini White specializes in long-range combat, using a customized ray gun to attack its enemies. If one becomes too wounded, they can conjure a special hole to recover while the other remains outside.

They are artificial Martians, created by the Professor and appear as young children with blue hair. As such, they are capable of communicating in both human and Martian language. The twins prefer to wear Martian costumes much like Percier, with both wearing a costume of their color.

They love the Professor and see him as a father, but they've apparently entered their rebellious phase. Despite this, they take his lessons to heart. As siblings, they greatly care for each other.

First seen in "One Mind", the Professor tasks the two with obtaining materials as many other Martians wish to be like the Martian Rangers. Both reluctantly accept the task, as they know the Professor is capable of doing so himself. They arrive at an Amadeus research facility and bump into a new Sea Satan model, which they easily destroy before scavenging it. Upon returning, Percier tries to give them her affection. Black shuns her, but White says that even though she is weird, they shouldn't openly mock her. The Professor congratulates the two for their success and pats both on the head, much to their embarrassment.

They later participate with their father in attacking a Rebel Army supply line, despite warnings from Percier to not participate. White is injured by the K-03 Coupled Armored Vehicle, and Black carries White away to the Professor upon spotting him. Percier applies first aid to White, to which Black gives Percier some Try Coins as a sign of gratitude. White asks Black why they gave the coins they obtained themselves, and Black responds that they want to get them together next time. White then asks if they intentionally left out the fact that the Try Line shop closes soon, something which they do not answer.

The twins later appear with Percier trying to find the intruder at the Martian base. Black complains about Percier's weakness when she cannot open a barred door, while White defends her stating that humans aren't as strong as them.

They're later alongside Percier as she operates a Dai-Manji when their spaceship is suddenly hacked. They accidentally insult Percier and are ordered to sit to the side, where they mentally communicate with each other, agreeing that the source is somewhere on Earth, but are surprised they have the technology to do so. They are brought to a Rebel Army base where they can only watch as their spaceship attacks, but they're able to discover the malicious program and remove it, ordering Percier to drive away once they regained control.

After Percier drives Pauline off, Black asks Percier why she did so, as she appeared to be quite useful. White then tells Black to be more considerate of their words, before Percier slaps them. White then accuses Percier of child abuse, but Percier counters by stating that they're artificial lifeforms, and is angered by how Pauline appears to be better than her. Black states that she doesn't have a flat chest, while White states that she's more womanly and nicer, and that she would not likely hit them. They both agree however, that they need to keep a watchful eye on her for the time being. Both are impressed with Pauline's contribution when she returns from a United Front operation, before watching her win Percier's trust and telepathically communicating to each other that they would have to watch Percier too.

They later participate on an attack at a Rebel base. After clearing as much enemies as possible, they find Percier fighting Norah. Black mocks Percier for not defeating the enemy, while White defends her by stating she did the best she could. Although Percier states that she can still fight, the twins drag her away as their time is up, as another hit would kill her.

Sometime after this operation, the twins are arguing with Leone, who had rushed to the Martians to remove some stubborn Invaders from her tank. They are annoyed by her constant state of panic as Black believes she could just get a new tank, and White notes that the tank is stronger with the Invaders on it. After Leone returns after hearing from Pauline that the Pharaoh could assist, the twins remark on how cunning Pauline is.

The Professor temporarily left the twins in charge of operations during Christmas. They had Clone Abby and Clone Betty head to Earth to collect information from the Regular Army's newest plasma weapons. When the clones returned, the twins, alongside Percier and Marty, surprised the clones with a party, having utilized the collected information to make plasma crackers. They hosted the party to celebrate Christmas, as both the twins and the clones were the Professor's creations. Although worried he might be upset they were wasting time, it is implied that he did not mind at all.

During the summer, the twins accompany Pocke and Draco to help them train for the annual Martian Ride Fight, a competition in which two friends (or some other relation) fight together in a competition. After seeing the two enjoying themselves, the twins believe they should participate to enjoy summer, and with Pocke and Draco's assistance, capture a local sea dragon. However, as the rules state that only two can enter, Black puts their name up first, while allowing White to participate so they can swap places. The ruse is quickly exposed by Pocke and Draco during the competition, and the two are banned from the competition for the next year.

They appear in the story "Subjugation Tactics", primarily in flashbacks. After the raid on the Rebel supply line, White asks Black what a soul is. Black wonders why White is showing a sudden interest in humans, but explains to White the concepts of a soul. While they dislike humans in general, they are willing to help White learn more about them by asking the Professor and Percier if necessary.

When Halle joins the Martians, she is excited with all the Martians she encounters and befriends them. Pocket looks on with jealously, and the twins comment on Pocket's situation being similar to that of Percier's. 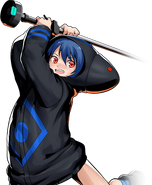 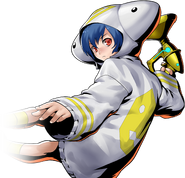 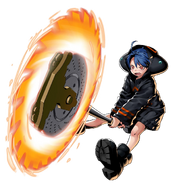 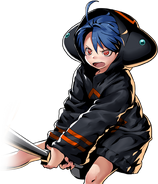 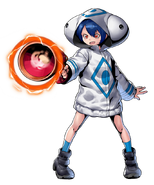 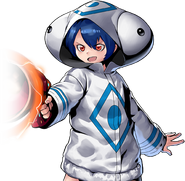 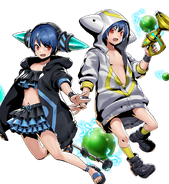 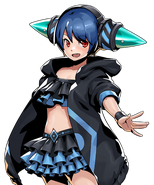 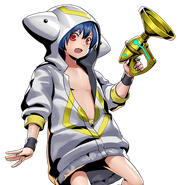 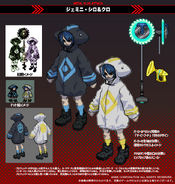 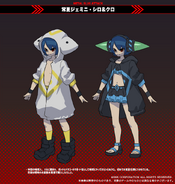