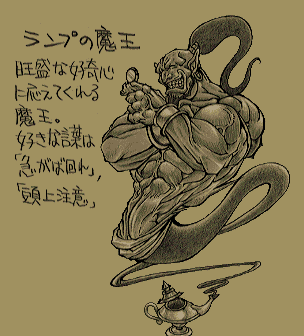 The Demon King will answer to one's curiosity. His favorite words are "Watch your head" and "Haste makes waste".

The Genie of the Lamp (ランプの魔王) is a secret item from Metal Slug 2/X.

Found hidden at the end of a secret detour in Mission 2 is a box holding an ordinary lamp that rewards 10 points when collected. If the player waits after a few poofs of smoke, the Genie comes off from a magic lamp, then turns into multiple coins while laughing. A second lamp is found by shooting above the first one.

In Metal Slug X, a mummy poison jar is located above the first statue as a trap. Shooting the box with the Shotgun or Flame Shot can hit the trigger of two Hunged Mummies ambushing from both sides.

The Genie also appears in Metal Slug Attack as a visual indicator on all of the Mystery Cranks to indicate the values of the icons from the pull:

Route of the lamp directly right from Marco's position.

Metal Slug 2
Lamp inside the box. The second lamp is found above it.

Metal Slug X
Lamp inside the box; the second lamp is found above it. Close to the box is an ambush trigger. Above Eri is a mummy poison jar.